Get down off your donkeys! 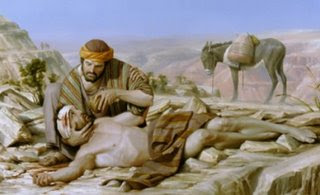 A seven-year-old named Reagan brought the story of the Good Samaritan to my mind again. So I’m re-running my own prior posting on this parable. If only Baptist leaders had the heart of a seven-year-old!

Let's just assume that other major faith groups, who have seen the need for record-keeping on "credibly accused" clergy, are all wrong, and that Southern Baptist leaders are right in believing this wouldn't help with preventing abuse in the future.

Should that be the end of the matter?

What about the people who have already been wounded? How should they be treated?

What is the moral and Christian response that religious leaders should make to individuals who report having been sexually abused as kids by Southern Baptist clergy?

These are people who often bear grievous psychological and spiritual wounds. As kids, they were stripped of humanity and dignity by men they were raised to trust unconditionally. They were violated in unspeakable ways by men of God, with words of God, and often in the house of God.

The trauma from this sort of abuse is so devastating that many victims never speak of it at all, and those who do often wait many, many years.

When clergy abuse victims are finally able to report their perpetrators, is it enough for religious leaders to shrug off their reports by telling them "all churches are autonomous?"

Is it moral for religious leaders to simply ignore such wounded people even while knowing that accused perpetrators remain in their pulpits?

Is it Christian for religious leaders to sermonize such wounded people on forgiveness while doing nothing to help them?

Through no fault of their own, clergy abuse victims are stripped of everything dear and then left wounded, naked and bleeding in the dirt of a spiritual desert. Years later, when they have finally crawled to the edge of the desert road, they will sometimes still muster a breath of hope to reach out to the faith community from which they came and seek help.

Tragically, for Southern Baptist victims, their experience usually winds up being similar to that of the wounded traveler in Luke 10.

Southern Baptist leaders look down from their high donkeys and pass right on by. The wounds of clergy abuse victims are too ugly, and so they avert their eyes. If Southern Baptist leaders allowed themselves to actually see those grievous wounds, they would have to face truths that do not flatter them, and this is something they apparently lack the intestinal fortitude to do.

So Southern Baptist abuse victims experience the reality of the Good Samaritan parable. We thought religious leaders would surely help us, but they wind up being the people who almost never do. Instead, they run their donkeys right past us and sometimes right over us. They leave us bleeding in the dirt, and do nothing to bind our wounds.

If help arrives, it almost invariably comes from unexpected people.

Southern Baptist leaders are so focused on the letter of their religious law of church autonomy that they neglect the spiritual components of compassion and care.

Yet Jesus himself rejected the letter of the religious law of his day and called people to a life of the spirit. He called people to the sort of life exemplified by the action of the Good Samaritan--a life of compassion put into deeds.

Though the Good Samaritan owed no obligation to the wounded stranger in the desert, he still got down off that donkey and did something. He went to the wounded person. He heard his moans and saw the wounds up close. He bound those wounds and he cared for the person.

It's time for Southern Baptist leaders to get down off their donkeys and grapple with the question of how to make a Christian response to people who have been sexually abused by Southern Baptist clergy.

At a minimum, shouldn't there be some place within the faith community where the cries of the wounded can at least be heard?

Jesus would point Southern Baptist leaders to the story of the Good Samaritan and tell them, "Go and do likewise."

Posted by Christa Brown at 6:52 AM

How much simpler does this have to be???....when will the hearts of the SBC leadership and those who sit in the pews be soft enough to grasp the point the story of the Good Samaritan makes???

A sweet 7 year old gets it. But the self annointed can't see and don't care.

In interviews with detectives, Gilyard defended his role as a counselor. According to the report, "He told the... family to look at the bigger picture."
He claimed he got the girl to get better grades and go to class, so "it wasn't all bad."

the above statement was taken from Christa's site...just one of the new articles posted on the Gilyard case.

It doesn't matter where this piece of dirt went to school or how many of the SBC power brokers posing as Christians supported this perverted freak.....he needs to be locked up for a very long time.

The words "it wasn't all bad" sting my soul and turn my stomach. Why do perps all use the same script?

45 years ago I was told something very similar while trapped under the weight of a Christian man I trusted.
Just reading Gilyard's words brings back smells, the taste of vomit, and absolute physical terror.

And yet so many Christians today react and behave the same way they did 45 years ago.
Nothing has changed. Our children, youth,the wounded and vulnerable aren't protected.
They just aren't as valuable as the big important men strutting around the churches.

People enjoy their life in the church bubble too much to care.
They won't wake up screaming at night.
They love to point the finger back at victims.
I hope Gilyard is put in prison with lots of friendly mean men.

I hope God deals with all the ministers and so called Christians who have ignored the pleas and screams of so many wounded souls.

It has to get better. I really wonder with Gilyard being black and with a homeless background that much was ignored for the sake of being stigmitized as racial along with the confrontation. This is not near a problem as it used to be.

Gmmomy is talking about this new news on Darrell Gilyard. This is the prominent pastor who was mentored and promoted by former Southern Baptist presidents Paige Patterson and Jerry Vines.

"Why do perps all use the same script?"
I've heard so many similar stories that I sometimes wonder whether there is a seminary somewhere that teaches them this terrible stuff. But what I really believe is simply that this is what happens when a predatory mind uses pastoral trust and the word of God as weapons... and when others keep allowing him to get away with it.

"... brings back smells, the taste of vomit, and absolute physical terror."
I know and understand, gmommy. Your words bring such great sadness to my heart, and yet I thank you for sharing them. Someone else out there will likely read your words, and it will help them to realize that others have such physiological reactions and that that they aren't just crazy. Sexual trauma sears and scars both brain and body, and both the mental memories and the body-memories often manifest themselves in unbidden ways.

Anon 2:55 - "Homeless background"? Gilyard's story of growing up homeless was discredited "when the Dallas Morning News reported that Gilyard in fact was raised in a comfortable home by a woman who said she took him in as an infant and raised him as a son."

Much was certainly ignored about Gilyard, but it was even worse than that. The victims were vilified. The Dallas Morning News reported that, even in the face of NUMEROUS accusations, former Southern Baptist president Paige Patterson (a white guy) said "It's amazing how jealousy, frustration and racism can be motives for making accusations." So, Patterson painted "Gilyard as a victim" and the accusers as being motivated by racism.

Looking again at that Dallas Morning News article, I can't help but ponder the irony of the headline: "The downfall of a pastor." Downfall? What downfall? Darrell Gilyard was preaching in another church less than 2 weeks after that article. Then he went off to a new church in Florida, where he was successful and widely praised. And even now, after all the news about the charges of sexually explicit text messages to teens and a child molestation charge against him, "Gilyard is said to be preaching and teaching at another church in Jacksonville."

Reagan is thrilled to be 'linked'. And I was very proud of her because she wrote this all by herself, her own words, on 2nd Grade tablet paper (5 pages, no less) and then typed it into the computer.

Kudos to Reagan on fine writing and wise words!