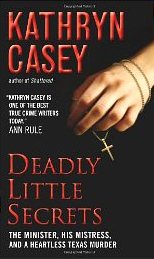 Author Kathryn Casey tells the true crime story of Southern Baptist pastor Matt Baker, who was able to migrate through many Baptist churches and schools despite multiple reports of sexual assault and abuse. In Baptistland, Baker apparently learned that his deeds carried no consequence. Ultimately he tried to get away with murder. . .  and he nearly did.  This is NOT fiction. Here’s aere’s Hn excerpt from Deadly Little Secrets.

”When her parents arrived, they accompanied Lora back to the stadium to meet with Sims. Once Lora explained what had happened, Matt was called into Sims’s office. 'Matt admitted what he’d done, but he said he didn’t realize he was hurting me,' she said. But there was no doubt that Lora had attempted to fight him off, attested to by the bite mark on his shoulder.

'This will be taken care of,' Sims assured her, saying she didn’t need to involve the police. Lora and her parents agreed to let the university handle the situation.. . . .  [“The university” is Baylor, a school affiliated with the Baptist General Convention of Texas.]

Lora returned to the campus after Christmas break… When she reported for work at the stadium, Matt was there, and it appeared his only punishment was to be confined to the training room to work with the players. ‘That was something that usually only the seniors were able to do,’ Lora says. ‘It wasn’t a punishment. It was more of a promotion.’

For Lora, the effects of Matt Baker’s attack lingered. She dropped out of athletic training and left Baylor before the semester ended. Months later, she was asked to put her recollection of the events in writing for Matt’s file. She did so. At the time, she was told there’d been another episode with Matt. . .

Departing Waco and Baylor, however, didn’t end Lora’s suffering. For years after, she endured nightmares in which it happened all over again . . . . Such nights, Lora woke up terrified. . . .


Were there any ramifications for Matt? . . . The university and Mike Sims would later refuse comment, so there would be nothing by which to judge their actions but the results. The undeniable consequence of the attack was that no one at Baylor filed a police report . . . and Matt Baker was allowed to continue at the university.


Perhaps it would have been expected that Matt would have learned from what he’d done, but then, he’d apparently suffered no punishment, so why should he change his ways? If Baylor had taken action, made sure that he was charged with a crime, Matt might have been held accountable. But they didn’t, and he wasn’t, and the following January, just weeks after Baker’s attack on Lora Wilson, he was home in Kerrville. It was there that he struck up an old friendship with Dina Ahrens . . . . Dina would later testify about what happened that night . . . It took all her physical strength to keep her clothes on. Why did Baker finally stop? According to Ahrens, it was only because he heard her mother at the door. . . .


Meanwhile, all continued to go well for Matt Baker. . . . The month after Wilson accused him of assault, no one from the university apparently protested when Matt was given a highly coveted position, an internship in the recreation department at the First Baptist Church of Waco, the premier church in the city, one tightly tied to Baylor. Perhaps they didn’t realize or maybe they didn’t care that at the church Matt’s duties would include working in the recreation center and at the summer youth camp, often around young, vulnerable women.


The man who hired him, Jake Roberts, was one of Matt’s teachers at Baylor… who also worked at First Baptist. . . .


In Texas, many [Baptist churches] belong to the Baptist General Convention of Texas (BGCT) at the state level and the Southern Baptist Convention at the national level….  Says a former member of the BGCT’s board: ‘We can’t tell them whom to hire. Basically, to be called a pastor of a Baptist church, all you have to do is have a church vote to hire you.’. . . .


When it comes to ministerial misconduct. . . ‘Many [Baptist churches] just fire the offending pastor or ask him to find something else and move on,’ says a former BGCT employee. ‘They want to get rid of their problem. They don’t worry about where that pastor goes next and what he might do once he’s there.’ . . .


It would later be unclear whether anyone at First Baptist reported to the BGCT regarding the allegations against Matt Baker since BGCT would refuse requests for records. . . .


Concerned about Baker, Roberts… took an additional step, writing a report on all that had transpired and putting it in First Baptist’s safe . . . .  [where it certainly didn’t function to keep anyone else any safer]


Later it would be difficult to pin down dates when Matt Baker worked at particular churches since few kept records. According to Matt’s resume, his first church position after First Baptist Waco was as a part-time youth and music minister working under the pastor at … First Baptist of Robinson . . . . Like so many of his jobs, his position in Robinson was short-lived, less than a year.. . .


In the summer of 1996, after losing the job in Robinson, Matt worked as recreation director at the prestigious Columbus Avenue Baptist Church in downtown Waco. . . . Matt’s sojourn as assistant recreation director, however, lasted only four months. . . .Yet, that fall, Matt was given another plum job, to pastor Pecan Grove Baptist, a small country church outside Waco. Pecan Grove was known as a good assignment for Truett students, a place where the seminary’s stars were groomed for the future . . . .”
_______________________________

Baptist pastor Matt Baker was convicted of murder in January 2010. At the time of his trial, prosecutors said they were prepared to put on evidence of at least 13 young women, including four minors, toward whom Baker had made sexual assaults and inappropriate “advances.” Here is a list of the many churches, schools and organizations where Baker worked, as they were reported by Texas Monthly magazine. Notably, almost all of them are affiliated with the same umbrella organization, the Baptist General Convention of Texas – an organization that is obviously lost in oblivion on the need for effective systems of clergy accountability. Indeed, even after multiple allegations, it was Baptists’ endorsement of Baker as a chaplain that allowed him to still get a job working with vulnerable kids at the Waco Center for Youth. If only Baptists had held Matt Baker accountable from the start, and precluded him from carrying the mantle of trust as a Baptist minister, perhaps the murder of a vibrant young woman could have been avoided, and almost certainly, numerous girls and young women could have been spared the savagery of sexual abuse and assault. Read the book.

Posted by Christa Brown at 5:40 PM


Excerpts below are from the 12/8/2012 St. Louis Post Dispatch article by Tim Townsend: "Fate of Baptist pastor accused of abuse is in the hands of his flock"

Last Sunday, the Rev. Travis Smith paced First Baptist Church’s sanctuary, decorated for the holidays with poinsettias and a Christmas tree. He addressed his congregation, speaking to them about forgiveness.


Smith read verses from the Gospel of Matthew that follow the Lord’s Prayer:


“For if you forgive other people when they sin against you, your heavenly Father will also forgive you,” he said.


Since Smith’s arrest in October on sexual abuse and statutory rape charges, which follow similar allegations from 2010, forgiveness from his congregation has become critical to his survival as its pastor. . . .


A deacon at First Baptist Church of Stover said that at its last monthly business meeting no one from the congregation even put forward a motion to dismiss Smith. . . .


The most recent accusations against Smith, 42, by two different women, stem from alleged incidents in 1998, 1999 and 2005, when the women were minors. Those allegations led to what the Missouri Highway Patrol called a “lengthy investigation.” The Martineau County prosecutor has charged Smith with six felonies, including sexual abuse, second-degree statutory rape and forcible rape. . . .


In 2010, according to news reports and law enforcement officials, Smith was arrested after a 14-year-old girl, a friend of his daughter, accused him of molesting her during a fishing trip. Another girl then came forward and said Smith began having sex with her, in 2005, when she was 15. Both girls were members of his congregation.


Last year, Smith was acquitted in one case and the other was dropped. A year later, he was arrested on the current charges, which involve different girls. . . .


In a statement, Rob Phillips, a spokesman for the Missouri Baptist Convention said the Convention has “no direct authority over” First Baptist Church of Stover, but that it was “deeply grieved by the allegations,” and prays . . . .


“There’s nothing about autonomy that precludes denominational structures,” said Christa Brown, author of “This Little Light: Beyond a Baptist Preacher Predator and His Gang.” “Other large congregational faith groups have regional bodies that assess a minister’s fitness to continue ministry.”. . .


“When a Southern Baptist church faces a crisis like this, the easiest thing to do is just let the guy go — he moves to a different state, gets a job at another church and there’s no record of his actions,” Brown said. “If a minister is not literally sitting in prison, he can find a Southern Baptist pulpit to stand in.”. . .


“This is a delicate situation for our church,” said Marriott, the church deacon. “We could jump to conclusions and dismiss him, but what if we’re wrong? We’re just a bunch of average people trying our best to live by God’s word.”


Smith’s sermon Sunday resonated with that struggle. Just as the Gospel of Matthew promises heavenly forgiveness to those who forgive, so, too, does it spell out consequences for those who refuse.

Posted by Christa Brown at 8:31 PM