SNAP at the 2014 SBC annual meeting 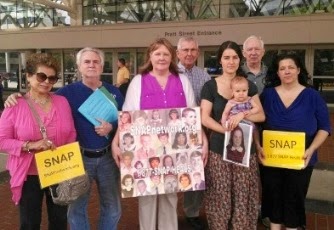 SNAP was at the Southern Baptist Convention's annual meeting June 11 in Baltimore, handing out flyers and urging Baptists to get serious about dealing with clergy sex abuse and cover-ups.

The evangelical "good-old-boys" network is just as effective at covering up clergy sex crimes as the Catholic hierarchy, said Pam Palmer, a SNAP member who spoke with the media there.

This problem is not going away, and the sooner Baptists start responsibly addressing it, the safer kids in Baptist churches will be.

Special Note:
To the person who wrote the May 16, 2014 comment on my "To the People of FBC-Orlando" post: Please email me.

Last Saturday in Florida, a unanimous jury awarded $12.5 million to a man who, as a child, was sexually abused by a Southern Baptist minister. Significantly, this verdict was assessed, not only against the local church, but against the Florida Baptist Convention.

To my best knowledge, this is the first time in history that a verdict has been handed down against a Baptist statewide denominational entity in a clergy sex abuse case. Attorney Ron Weil of Miami is the person who brought this “game-changer” of a lawsuit to fruition.

I’d like to imagine that Baptists will view this as a wake-up call to begin implementing the sorts of systematic safeguards that other major faith groups have. But Southern Baptists have shown themselves to be recalcitrant in this arena, and so I expect it will likely take still more lawsuits – and still more needlessly wounded kids – before that happens. For now, the Florida Baptist Convention is simply saying that it plans to appeal.

For twenty-five years, I practiced law as an appellate attorney in Texas. So I know a thing or two about what can happen in the appellate process and what the possibilities are. But whatever may happen next, this case has already brought a seismic shift in the terrain of Baptist clergy abuse litigation.

This $12.5 million verdict will also garner the attention of other trial lawyers, who will now see that the Southern Baptist wall has been breached, and who will bring still more lawsuits in an effort to widen that breach.

No more will Baptist officials be able to brag that they always prevail on summary judgment. They likely had to incur much larger attorney fees in defending this case in a full trial, and it is likely that many more cases will go to full trial in the future. With trials, you get the public disclosure of many more facts – facts that denominational officials might prefer to keep hidden.

Because Southern Baptist officials have historically prioritized the protection of denominational dollars, cases such as this are what are needed if kids are to gain better protection against Baptist preacher-predators. When Baptist officials are forced to spend down enough of their denominational dollars, they may eventually see the sense in re-ordering their priorities for the protection of kids. It’s a shame this is what it takes . . . but it does.

For far too long, preacher-predators have been able to easily church-hop through this porous denomination because Baptist leaders have pretended that their version of “local church autonomy” precludes any systematic denominational sharing of information about reported clergy child molesters. This religious rationalization has amounted to little more than a candy-coating on Baptist leaders’ irresponsible inertia, and it has left a trail of destruction in the lives of countless kids. But Baptist leaders have been successful with this religious-sounding ruse . . . until now.

On the facts of this case, the Southern Baptist Convention’s “local church autonomy” defense failed, and a jury found that a statewide denominational office bears responsibility. Some may argue that this case was unique or that other cases will be different. But while other cases may indeed bring other facts to the table, most Baptist ministers bear commonalities by virtue of their affiliation with the denomination. For example, it is common for Baptist ministers to be aided in job searches through denominational services and to be listed in denominational directories. In any event, there are always variables in particular cases, and this is the very essence of how tort law develops – i.e., case by case.

In the not-too-distant past, when a drunk driver caused harm, only the drunk driver bore responsibility. But as the carnage caused by drunk drivers became better documented, the law slowly changed, case by case and through legislation, so that those who sold alcohol to already-intoxicated people would also bear responsibility. Those who gave the drunk driver the weapon of harm could no longer throw up their hands and say “not my problem.”

Similarly, I believe the law will eventually become more uniform in recognizing the relational responsibility that Baptist denominational entities should bear based on how they promote and facilitate the employment of Baptist ministers. This is, after all, a cooperatively functioning denomination that takes in over $500 million a year into centralized coffers. Abusive Baptist ministers are not lone-wolf rogues, but rather, they are affiliated with a denomination of enormous influence, and that affiliation aids in the public perception of ministers’ authority.

For far too long, Southern Baptist officials have been distorting their “local church autonomy” doctrine to serve as what is, in reality, a legal strategy for trying to shield the denominational structures from the risk of liability. The doctrine has been functioning as a tactical construct and not a religious construct. Ultimately, however, the law must look to how Baptist denominational entities operate in the real world and not merely to the abstraction of what denominational officials say.

Thankfully, that is exactly what the jurors in this case did. They looked at reality.

Slow or fast, change is coming to Baptistland. It is inevitable. I rest my faith in the justice-making work of American trial lawyers and in the ordinary good sense of American people who serve on juries.
___________________