Be gentle with yourself 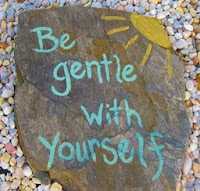 “When the truth is spoken and it don’t make no difference, something in your heart goes cold.”
-- Bruce Springsteen


Trauma experts confirm the critical importance of social context in determining how people process traumatic events. If traumatized people are supported by a caring community, they may often do quite well even after terrible events. But when traumas are inflicted on a child by someone who is supposed to take care of the child, and when the child experiences those traumas repeatedly, and when the child’s community colludes to deny the reality, and when the child is not allowed to feel what he feels or give voice to what he knows, then the child’s mind cannot process what has happened and the trauma embeds itself more deeply.

This truth about the importance of context manifests itself in the stories of clergy sex abuse survivors. These are people who, in childhood, experienced a terrible crime, but for whom the traumatic impact is typically derived from much more than the predatory acts of a single person. Rather, when the offender is a much-trusted minister, the degradation of childhood rape and molestation is often exponentially magnified by the community’s long-continuing efforts to minimize, deny, and cover up – i.e., by the context. We have seen this pattern over and over again.

Thus, the context that surrounds clergy sex abuse makes it a classic context for giving rise to long-term trauma-related issues. For those who experience such traumas during the vulnerable developmental periods of childhood and adolescence, the impact is often more profound than is encompassed within the usual parameters of a post-traumatic-stress-disorder diagnosis. Generally, the diagnosis of PTSD was developed in connection with adults and does not take into account the ways in which chronic, repeated traumas affect a child’s development.

So, researchers have coined the term “complex trauma” to refer to the more disruptive and all-pervasive constellation of problems – problems of mind, body and spirit – that derive from such traumas. They include such symptoms as hypervigilance, dissociation, chronic sleep disturbances, nightmares, persistent feelings of worthlessness, emotional numbing, feelings of shame and self-blame that generalize to daily life, an impaired ability to sustain close relationships, disconnection from others, and a rupture of one’s most basic systems of meaning. These symptoms may persist long after the traumatic events.

Experts recognize that complex traumas can often be highly intractable and very difficult to treat. Complex trauma imprints itself in ways that are not connected to cognitive processes, and so we cannot reason ourselves free. The problem is not all “in our heads,” but rather, complex trauma lodges itself in the body’s physiological processes. The ACE study brought us staggering proof of this physiological correlation when serious traumas, such as sexual abuse, are experienced before the age of eighteen. Like some sort of mutant virus, complex trauma takes up residency within our bodies, always waiting for some moment of weakness when it can unleash its destructive force yet again.

The contextual impact often compounds itself in subsequent decades when a clergy abuse survivor attempts to speak out about what was done to them. The truth of our stories is deeply uncomfortable for many people, including not only religious leaders but often friends, family and community. Perhaps it is because they cannot bear to see their own complicity or perhaps it is simply because they prefer the familiar terrain of their self-told soft lies rather than the seismically-shifted terrain shaped by the hard truths of clergy sex abuse. Whatever the reason, the result, once again, is that the context complicates the traumatic impact. The devastation of clergy sex abuse continues to reverberate through the decades as church, community, and even family persist in sending messages of “what was done to you doesn’t matter.” It is a cruel message that gets communicated in a myriad of ways.

Often, the message is made even harsher by the suggestion that we should not only heal ourselves but should also take on the obligation to make everyone else feel better. We are essentially chastised for making others uncomfortable. And we are expected to shape our stories of clergy molestations and rapes into less ugly versions that will not upset the equanimity of the community.

When so many turn a blind eye, shame the victim further, and collude in cover-ups, it is easy to see why clergy abuse survivors often lose the most basic of trust in the shared bonds of a caring humanity. In the long litany of harm caused by clergy sex abuse, I often think this is perhaps the most pernicious damage of all.

In so many ways and with so many voices, we hear these sorts of messages so often – “Why don’t you just get over it?” – that we ourselves sometimes wonder all the more about what is wrong with us. And when we find ourselves dealing yet again with the nightmare that we thought we had already dealt with, it is easy to get discouraged.

But for those of you who have experienced the trauma of clergy sex abuse, know this: What you feel is normal. And your long, circuitous path of healing is normal. Those who suggest otherwise are ignorant.

So when you feel yourself discouraged, my earnest plea is simply this: Be gentle with yourself.

What you are dealing with is incredibly difficult. Experts know this. Believe them, and ignore the ignorant.

Posted by Christa Brown at 3:19 AM

Truth and Reconciliation Needed in Baptistland

In the wake of Nelson Mandela’s death, journalist Peter Beinart posed this piercing question: “Why, in recent days, has the American media focused so much more on Mandela’s capacity for reconciliation than his demand for truth?”


Beinart, who is also an associate professor at City University of New York, presented a possible answer: “Perhaps,” he said, “it’s because, all too often, America wants reconciliation without truth itself.”


I think Beinart may be on to something.


“Truth itself” can be terribly hard. It’s way easier to skip straight to the reconciliation part.


Certainly, we have seen this pattern in Baptistland, where religious leaders are fast to preach on forgiveness but disinterested in the truth about clergy sex abuse and cover-ups.


Indeed, in America’s largest Protestant faith group – the Southern Baptist Convention – religious leaders are so disinterested in – or afraid of – the truth about the extent of clergy sex abuse and cover-ups that there doesn’t even exist the possibility of a denominational process for assessing clergy abuse reports. Nor does there exist any denominational process for keeping records on how many abuse reports a minister may have, for informing congregations about multi-accused ministers, or for disciplining those clergy who cover-up for the unspeakable crimes of their colleagues.


One of the best ways to protect children in the future is to hear the voices of those who are attempting to tell about abuse in the past. Those voices almost always carry ugly, hard truths – truths about not only the preacher-predators but also about the many others who turned a blind eye or who were complicit in covering up for clergy child molestations.


Baptists need their own sort of Truth and Reconciliation Commission to bring the truth of these voices into an arena where they can be heard.


Those parents who sit in pews and wonder about how many of their leaders may have been complicit in covering up for clergy child molestations – those parents also are in need. They need a credible outside resource to illuminate the truth for them – or at least as much of the truth as can possibly be ascertained.


So long as Baptists persist in trying to deal with clergy sex abuse “without truth,” kids in Baptist churches will not be made safer.


Rather, if kids in Baptist churches are to be made safer against clergy sex abuse, then Baptists everywhere must engage a sacred commitment to shared truth.


A faith so feeble that it fears the truth is no faith at all.
___________________________
Some of my remarks in this posting were previously quoted by journalist Peter Smith of the Louisville Courier-Journal in an article called “Evangelicals urged to confront sexual abuse.”

Thanks to Frederick Clarkson for quoting extensively from this posting in his 12/10/2013 article titled "Child Sex Abuse Crisis of the Religious Right Grows."

Posted by Christa Brown at 7:10 PM