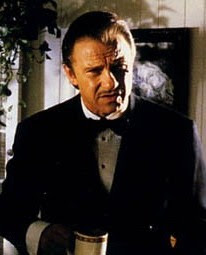 Pastor Ben Cole told the Texas Observer he “learned a lot about being a Southern Baptist from The Sopranos.” It’s “the whole Godfather thing,” he said.

Cole ought to know. As part of Southern Baptists’ “inner circle,” he learned about such things as “enlisting the media in disinformation campaigns and spying on enemies.”

“From the highest levels of denominational leadership to the smallest church…we are a convention of half-truths, hidden agendas, and careless misrepresentations,” said Cole. “Sometimes we operate like the Cosa Nostra.”

In fairness, I should point out that Cole seemed to say this with love. He wholly embraces his faith group and isn’t afraid to speak candidly. I respect that. (I’m also grateful to Cole because he gave me a good laugh with his own blog postings and YouTube videos about the homemaking degree that’s offered at Southwestern Baptist Theological Seminary. I myself learned to sew on a vintage Kenmore just like the one in Cole’s video. Think I could get an honorary degree?)

Still, I couldn’t help but think that Cole may have been closer to the truth than he realized with his Cosa Nostra analogy. If that’s what Southern Baptists seem like to someone on the inside of the organization, can Cole possibly imagine how those of us on the outside get treated? Those of us who refuse to “pay, pray and obey”? Those of us who try to bring to light the ugly misdeeds, crimes and cover-ups of this “Cosa Nostra-style” organization?

Well, I can tell you, it gets pretty unpleasant. These are people who expect respect on their own terms, who are accustomed to getting it on their own terms, and who know how to inflict pain on those who don’t abide. (Columnist Roddy Stinson evoked the same mafioso analogy in describing the “no-holds-barred tactics” of Southern Baptist bosses, but Stinson wrote with less affection.)

In Texas, the Baptist leadership even has a guy who reminds me of “Mr. Wolfe”….you know…Harvey Keitel’s character in Pulp Fiction...the guy who "takes care of problems."

If a clergy abuse survivor doesn’t politely accept their pastoral pat on the head, and then go away and keep quiet, the Baptist General Convention of Texas sends out this Mr. Wolfe-like guy to make sure the mess gets cleaned up. (It’s apparently part of the BGCT’s “crisis guidance” for churches. Sounds more and more like the job Mr. Wolfe did for the crime-boss, doesn’t it?)

So, the BGCT’s Mr. Wolfe-like guy tries to scrub it, whitewash it, spin it, and make it all go away. He’s very good at what he does, and just like the movie’s Mr. Wolfe, he does it with a surreal air of pseudo-civility.

But of course, if you actually ponder what’s getting whitewashed -- clergy child molestation and child-rape -- then it starts to make your stomach turn. I figure that’s why the BGCT keeps “Mr. Wolfe” at the ready. He takes care of such problems, and that way, the Baptist bosses can wash their hands of it and not have to personally contemplate the ugly realities too much.

I like to imagine that the redeemed Jules might have a thing or two to say to these blind-eyed Baptist bosses. Remember Jules? He was Pulp Fiction’s scripture-quoting assassin who left behind the life of a knee-breaker when he finally recognized truth. Maybe Jules could help even these Cosa Nostra-style Baptist dons to see the truth of what they’re doing and to embrace radical change.

Well…that's the optimist in me. Jules is fiction; Baptist bosses are real; and in Roddy Stinson’s words, they have a history of “cutting off ears, punching noses, cracking spines and giving a huge black eye to the Christian faith.” For too many Baptist clergy abuse survivors, that metaphor seems painfully close to the mark.

I agree with Mr Stinson's statement: "Southern Baptists float from city to city, cutting off ears, punching noses, cracking spines and giving a huge black eye to the Christian faith while proclaiming that God is love."

Christa, the greatest abuse was done to Christ, who was not a victim but a willing sacrifice for humanities' atonement. He endured shameful mock trials and painful scourgings. He suffered humiliation before he was crucified. He was made to carry on his slashed back a heavy crossbeam.

AT the site of his punishment large nails were driven into his hands and feet. These nails had large heads to keep the body from sliding off.

The Romans had learned to push the feet upward so the victim could lean on the nail and then push himself upward to draw a breath. This ensured that he would suffer for a long time. The victim finally dies of constricted breathing due to lack of strength to lift himself for breath. It was a painful torture.

Christ died for thoes who spat on him even the perpetrators who commit these criminal rapes.

The gospel of "love" that these SBC preachers preach diminishes the message of the atonement of Christ, profaning his blood and outraging the Spirit of grace.

"For we know him who said, "vengeance is mine, I will repay." Pastors amd preachers, It is a fearful thing to fall into the hands of the living God!

Perhaps the eternal God has time to contemplate vengeance, but I don't, and in any event, I figure that's up to God. What I believe is simply that God expects me to use my time and talents in the here and now, on this planet, to do whatever I can to try to protect the vulnerable and help the wounded. No amount of God's vengeance in the afterlife is going to make any kid any safer in the here and now. That's the lesson I wish the REDEEMED Jules could teach to Baptist bosses so that they would see the truth about all the hurt that they're inflicting in the here and now.

If a person stands aside and allows an innocent and naive human be sexually raped physically, spiritually and emotionally by a minister, and does nothing about it, will the person who does nothing have to answer to God for not doing something to prevent it from being done to another?

absolutely yes, he will have to answer to God!