Screaming at the ocean 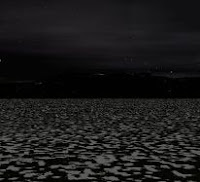 Years ago, on moonless nights, I would sometimes go to a small ocean-side park. There wasn’t much of anything there – just a few picnic tables. No one else was ever around.

I’d go down to the ocean’s edge and stand in the pitch-black darkness and scream.

There at the ocean’s edge, my screams became one with the sound of the crashing waves.

The waves brought my screams immediately back to my ears, but transformed them.

Sometimes the waves took my screams and made them even louder, as though the ocean itself were roiling in rage along with me.

Sometimes the waves took my screams and allowed them to simply join with the cosmic chorus, as though they were mere accompaniment to the ocean’s own endless music.

However the ocean responded, I would keep screaming until I could scream no more.

Once I was surprised when I heard a man’s voice mock my scream. He sounded no further than 25 feet away, but it was so dark I couldn’t see him. When he started making fun of me, a woman’s voice immediately rose. “Stop it John. Let her scream.”

I pondered the darkness and the voices and I left that night. But my need to scream didn’t go away so easily. It called me back to the ocean’s edge again and again.

I didn’t have a clue why I was screaming. Nowadays, the reason seems obvious to me. But back then, I only knew that I needed to scream and that, when I stood in the dark at the ocean’s edge, the screams came forth from within me.

Posted by Christa Brown at 9:17 PM