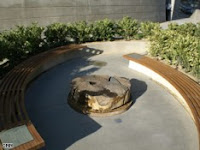 A California cathedral dedicated a first-of-its-kind garden to honor victims of clergy sex abuse. The garden has a broken, circular stone sculpture in the middle. Father Paul Minnihan, the provost of the Oakland cathedral said the garden was important “for the victims, and for the church to atone for the sins of its past.”

At the garden's dedication, the bishop of the Oakland diocese made a public apology to clergy abuse survivors, and pointed to the language on the plaque: "We remember and we affirm: Never again."

When I saw this recent news, I couldn’t help but think back to the start of my own journey in dealing with all this. When I reported the minister who molested and raped me as a kid, I asked the church and the Baptist General Convention of Texas for some sort of enduring symbolic gesture to show the denomination’s care for clergy sex abuse victims and as a focal point for awareness of the problem.

I thought my request was so positive in nature.

My first suggestion was for a small basalt millstone sculpture. It would have cost about $5000. But the church immediately rejected this idea as being “too negative.”

So, I next suggested a labyrinth set into a small contemplation garden, and I offered to wield a shovel myself. This was what I really wanted anyway, but I had been trying to give them a more biblical option with the millstone suggestion.

I asked that it have a small plaque, set off to the side, saying:

“Dedicated in prayer for victims of clergy sex abuse
and in honor of their efforts to reclaim life and faith.”

I also asked that it be in a publicly accessible place so that people who might not set foot inside any church would still feel welcome there.

For a while, I actually believed that the Baptist General Convention of Texas was going to do this. They told me face-to-face that they would, and in subsequent correspondence, they even said they were making “headway.”

In hindsight, I think they were probably just stringing me along, hoping I would get tired and go away. Eventually, they cut off all communication with me and told me that, if I had any other requests, I should direct them to their lawyer. It was pretty cold.

But of course, in hindsight, I know a whole heckuva lot more now than I knew then.

Back when I was talking to them about a garden and a labyrinth, I had no idea that my perpetrator, Tommy Gilmore, was still working in children’s ministry. The Southern Baptist Convention had written me, saying that they had no record of him still being in ministry, and I took the letter at face value.

The music minister of First Baptist Church of Farmers Branch had substantiated my report. He knew about Gilmore’s abuse of me even when I was a kid. The Baptist General Convention of Texas had written me that they had put Gilmore’s name in their file of clergy predators. Under their own published policy, they could have put his name in that file only if a church reported Gilmore (not merely me), and only if there was a confession or “substantial evidence” the abuse took place.

Given all of that, I was literally incapable of imagining that Gilmore could still be working in children’s ministry. Incapable.

And I was incapable of imagining that so many religious leaders could know about a minister who had molested a kid, and could nevertheless choose to do nothing. Incapable.

And I was incapable of imagining that they wouldn’t even choose to warn people in the pews. Incapable.

So when I learned that Gilmore was in fact still working in children’s ministry, I realized how naive my request for a symbolic gesture had been. What good was a symbolic gesture of care if no one even cared enough to take the first step of trying to prevent a known clergy-perpetrator from harming others?

You might think that someone who has been molested and raped by a minister would be more cynical. But I wasn’t. Back then, I was still literally incapable of imagining that so many other religious leaders would turn a blind eye. To this day, it’s the part that I can never quite wrap my head around.

Four years ago, for the cost of a $5000 millstone sculpture with a small plaque, I would have gone away and never been the wiser. I would have believed what Baptist officials said; I wouldn’t have bothered to keep looking for Gilmore; and I would have never seen such a cauldron of dissembling and duplicity in this do-nothing denomination.

Now that I’ve seen it, there’s no way to un-see it.

Posted by Christa Brown at 5:48 PM

Those words are so powerful.
So very powerful, that they render me speechless. And I'm so ashamed of what has become.

The real ragedy of this is that I do not believe we have see it all yet. I am seriously considering a tatoo that says simply, "TRUST NO ONE"! This is so sad.