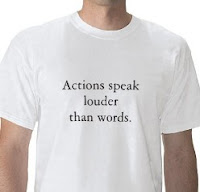 In Louisville, Kentucky, the Southern Baptist Convention is gathered for its annual two-day hoopla. The theme of this year’s convention is “Actions speak louder than words.”

“Actions speak louder than words.” It’s a good slogan, but do you really mean it?

A year ago, your Executive Committee announced its decision not to create a clergy-predator database or an office to field abuse claims. (Eric Gorski - Associated Press, “Southern Baptists reject sex-abuse database,” Washington Post, 6/10/08).

Oh sure, we heard the fine preaching of Executive Committee president Morris Chapman. We heard him “encourage” local churches to rout out predators. But that was just words. Where is the action?

Southern Baptist woman Alyce Faulkner also heard Chapman’s preaching, but she didn’t applaud like so many others. “Am I the only one sick of empty words?” she asked. “We rally around words -- when will we rally around reality? Once again, we resolve to do nothing. God help us.” (Miracle of Mercy blog, 6/10/08)

Make no mistake about it: others can see that this denomination’s response to clergy sex abuse is just talk -- platitudes and preaching. Where is the action?

Did your Executive Committee even do so much as a legitimate study on the clergy abuse issue, as messengers directed it to in 2007? Some might reasonably wonder. When asked, no one at SBC headquarters could provide a budget for the “study,” and SBC official Roger “Sing” Oldham admitted that there was no specific budget for it. (Elizabeth Ulrich, “What would Jesus say?” Nashville Scene, 2/14/08) Recently, in talking about a marketing strategy, your former vice-president of evangelization, John Avant, said that “you can’t have a vision that doesn’t have a funded budget.” (David Waters, “Southern Baptist decline and God’s bottom line,” Washington Post, 12/22/08) He’s right. Without even so much as a funded budget, it’s obvious that your Executive Committee never had any vision for effectively addressing or even studying Baptist clergy sex abuse.

When this denomination finally decides to actually take action against clergy sex abuse, here are the basics of what it needs to provide: (1) a safe and welcoming place for people to report clergy sex abuse; (2) an objective, professionally trained panel for responsibly assessing abuse reports; and (3) an efficient means of assuring that the assessment information reaches people in the pews -- i.e., a database.

Tell your Baptist officials to get busy. Tell them you’re tired of just talk. Tell them “actions speak louder than words.” Tell them soon.

Action is what protects kids; not words.

Posted by Christa Brown at 6:47 AM

Why don't you move on to another denomination? Seems like all we hear is a bunch of criticism and denegrating of Southern Baptists (which they rightly deserve) but isn't it time to find a place where you can actually get something done. Looks to me like you are wasting your efforts because they sure aren't listening.

Wasting her time? Gimme a break. Every time wrong-doing is exposed, somewhere wrong-doing is deterred. Christa's efforts may or may not eventually prod the Baptists to act like Christians in child sex cases. But her efforts are already helping to heal deeply wounded survivors and prevent more abuse and pain. For that, she deserves commendation, not condemnation.

To Anon 11:16 - I think the ones who are "anti-Southern Baptist" are the Southern Baptist leaders themselves. The real Southern Baptists are the congregants, the people in the pews who faithfully come to church, participate in ministry, give of their tithes, and serve the Lord in their everyday lives.

What Christa is doing is actually pro-Southern Baptist!

The question I have is this: why is it that the Southern Baptist leadership is continually reluctant to protect the flock? They would rather protect sex offending pastors than women and children. Actions DO speak louder than words!

Excellent letter, Christa. Keep plugging away -- the constant pressure of the ocean's waves and tides eventually breaks even the hardest rocks into sand.

What do you expect, exactly? A big sorry from Paige Patterson from stage? A press release admitting everything? Get real. Trust me, folks are starting to get it...slowly but it is happening.

And besides, the leaders most likely will not change. But the people in the pews can be made aware of the kind of leadership they have.And folks vote with their pocketbooks in the SBC.

Trust me, today at the convention, the theme was really: Money. It was mentioned in almost every single speech...er, sermon.


How many years did it take Wilberforce?

Maybe Baptist leaders have reflected enough on this topic and recognize that as human persons, they're flawed, imperfect and at times greivious sinners. As a Chritian institution, they look to the Scriptures for direction on how to cope with their own deep sinfulness and shame.

And so, when the wrong doing of the woman caught in adultery was exposed by the lawyers and religious leaders of the day, Jesus challenged their self righteous (albeit legal) actions with a new standard. "You without sin, cast the first stone." The crowd dropped their stones, and went back to their homes. And Jesus, seeing that no one stood there any longer there to condemn her said "nor do I condemn you."

Were I to take any action on this complex and troubling topic, it would be to foster understanding and forgiveness. It's the Christian thing to do.

The Christian thing to do would be to minister to the wounded. How will Baptist leaders ever begin to understand the horror of clergy sex abuse if they won't even get down off their high donkeys to hear the cries of the wounded, to see the extent of those wounds, and to minister to them?

The Christian - and decent - and human thing to do would be to protect the young and vulnerable. Experts recognize that sexual predators almost always have more than one victim and that they often use positions of trust to gain access to their victims. There is nothing Christian about a system so void of accountability that clergy predators can church-hop with ease to new and unsuspecting congregations.

Goodness me! Someone sounds like they got BOTH hands full of stones!

Abraham Maslow wisely observed: "If the only tool you have is a hammer, you tend to see every problem as a nail." If we're going to get through this serious problem together, we're all going to need to develop NEW tools and skills.

Insighting fear is not a motivator to change anyone's behavior let alone an entire denominational leadership! Just look at open heart surgery patient studies! How many stick to the trifecta strategy of diet, exercise and stress less than two years post op?

Inflamatory name calling and Cheney-esque fear mongering will do little, except perhaps to help a few lawyers and child advocates continue to pimp CSA survivors.