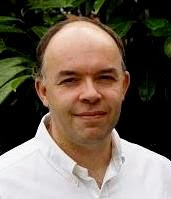 A prominent British Baptist minister is being held in a Virginia jail on charges of child molestation. Robert Dando, the senior minister of Worcester Park Baptist Church in suburban London, is charged with four counts of aggravated sexual battery of a victim younger than 13.

Dando previously served as executive assistant to the president of the Baptist World Alliance, David Coffey. Thus, Dando was closely connected to the highest levels of Baptist worldwide leadership. (That's Dando in the photo.)

“The Baptist World Alliance … is the public face of Baptists worldwide.” So says Bruce Gourley, the executive director of the Baptist History and Heritage Society.

The Baptist World Alliance is comprised of all manner of Baptists from all over the world, and it claims to represent almost 40 million people of Baptist faith. Indeed, it includes almost all Baptist groups except the largest of them, the Southern Baptist Convention.

It is the name “Baptist” that carries the brand of this global faith community, and not “Southern” or “Cooperative” or “Free Will” or any of the other numerous adjectives that get put in front of “Baptist.”

When ordinary people read of a “Baptist” minister charged on child sex abuse, they don’t usually give much thought to the particulars of precisely what kind of Baptist it is. In the eyes of the world, all Baptists wind up being tainted by the endless plague of Baptist clergy abuse and cover-up cases.

Therefore, all Baptists share a common interest in ridding their ranks of clergy predators, and all Baptists need to work cooperatively to effectively address the scourge of clergy sex abuse.

They should do it, not only to preserve the goodwill of the “Baptist” brand, but because it is the right thing to do. After all, at their recent conference in Honolulu, Baptist World Alliance leaders focused on the message of Luke 4 in which Jesus proclaimed part of his mission as “release” for the “oppressed.”

In Baptistland, who are more “oppressed” than those who have been molested, raped and sodomized by Baptist clergy? We are the pariahs -- the ones whom no one wants to see.

How do Baptists imagine that they will “release” those who have been “oppressed” within their own faith group if they refuse to even listen to them? Yet, in most Baptist faith groups, there doesn’t even exist a safe place to which Baptist abuse victims may report clergy sex abuse.

Unless a Baptist minister is criminally convicted and sitting in prison, he can usually stand in a Baptist pulpit. There is typically no one in Baptistland who will even bother to look into an abuse report.

When their own faith is used as a force for oppression, and when the most vulnerable among them are wounded by the most powerful, Baptists provide nowhere to turn. Baptists are blind to the oppression in their own Baptist yard.

If indeed the Baptist World Alliance is to carry “the Baptist torch” into the 21st century, then it must forge a common voice for fighting Baptist clergy sex abuse and for ministering to those who have been wounded by Baptist clergy.

Posted by Christa Brown at 8:24 PM