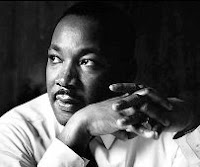 As I have watched so many clergy abuse survivors struggle against the dehumanizing effect of Baptists’ institutionalized injustice, I have often pondered the words of King’s letter. And I too have grown to the conclusion that, in Baptistland, the “moderates” may be the most frustrating of all.

Any fool will know that religious leaders who denounce clergy molestation survivors as “evil-doers” and “opportunists” will not be likely to extend compassion or care. Of course, that’s “any fool” except countless other Baptists who remain content to keep the men who spew such hateful words in high leadership. Nevertheless, for us mere mortals, the heartless cruelty of Baptist men such as that -- and there are many of them -- is at least transparent. So we don’t get our hopes up.

But it has taken me much longer to accept the reality of what King wrote about in his letter -- the reality that, with only rare exceptions, “moderates” are equally unhelpful. They are “more cautious than courageous,” and they remain “silent behind the anesthetizing security” of their status-quo do-nothingness.

In fact, with respect to clergy sex abuse, most “moderate” Baptists maintain the same status-quo do-nothingness as the “conservative” and “fundamentalist” Baptists.

I have often heard virtually identical words from “moderate” Baptist leaders. But I, too, have seen that, though “moderates” may say they agree, they will not take steps toward actually implementing change because to do so would upset their status-quo power structures.

And the “moderates” put forward the exact same excuse as those other Baptists who call us ugly names. It’s the “all Baptist churches are autonomous” excuse.

They are more devoted to their “order” of autonomous churches – an “order” that they themselves define – than they are to justice-making, reconciliation, protection of the young, or care for the wounded.

Perhaps worst of all, they proclaim their “order” as religious doctrine, which only serves to twist religion into a tool for the further oppression of those who, at the hands of Baptist ministers, have already suffered more than enough from the perversion of religion as a weapon.

Sometimes I really wonder . . . do you think Baptist leaders actually believe the words they speak?

Do they actually believe that, despite the cooperative connectivity of Baptist churches, Baptist leaders are nevertheless powerless to do anything about clergy who are credibly accused of molesting kids? Or do they simply spout the Baptist party-line of “autonomy” to avoid rocking the boat, to protect their own careers, or simply to preserve the false-peace of the status-quo?

Do they actually believe that the New Testament prescribes the parameters of “local church autonomy” so precisely that it allows Baptist churches to cooperate for funding ministers’ retirements, for international missions, for keeping historical records, and even for investigating churches with gays in their membership . . . but NOT for responsibly assessing reports about clergy who molest kids?

How do intelligent “moderate” religious leaders arrive at actually believing such things?

If they can come up with such a contrived “autonomy” definition as that, why do they not go ahead and come up with a definition that will serve for the protection of kids and for ministry to the wounded? It’s obvious that, in practice, they’re defining it how they themselves choose. So why don’t they choose a definition more functional for the well-being of others?

How do intelligent “moderate” people convince themselves that providing critical information to congregations -- information about ministers credibly accused of sexual abuse -- will somehow take away the autonomy of churches to decide what to do with that information?

This column is a revised version of my 2010 MLK-day posting.

Posted by Christa Brown at 5:25 PM

I think it's all about powerful men who know what they want-power-and know what those in the pew want-to be comfortable.

Are they going to criticize and stir up their group? No.

They've chosen certain enemies that they're comfortable with-gays, women that don't know their place, atheists, etc. They have no interest in fighting child abusers. That's not the group they want to be against. A lot of those child abusers are authoritarians. Those in the pews in fundamental churches loves authoritarians. They love powerful preachers even if they are also child abusers.

Do they preach and rant on the evil of anyone who'd hurt a child? No. They rant about the evil of being gay or not fearing God (which they obviously do not fear God themselves.)

As King basically said, it's those in the pews who keep it all going with their approval, attenaence, and money. They value a comfortable Christian experience way more than the messiness of confronting real evil.

Anonymous, I agree completely. I especially like your comment, "They value a comfortable Christian experience way more than the messiness of confronting real evil."

Indeed, what these pew-sitters want is the warm fuzzies they get by being part of a church. So much of their Christian and church experience is rooted in tradition and cultural expectations.

The traditions aren't as much fun when you choose to look honestly at clergy sex abuse.

Christa, thank you for this post about Martin Luther King, Jr. and the current relevance his words and observations have today.

Reminds me of what comedian/civil rights activist Dick Gregory once said: "A moderate is a person who will hang you from a LOW tree."