Behind the scenes with Southern Baptists 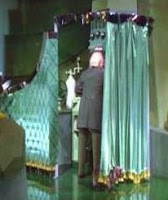 In public statements, Baptist officials say they care about clergy sex abuse victims. But do they really? Let me tell you just a few behind the scenes stories.

Shooed from shade into sun
Outside the San Antonio convention center was a huge plaza area, where we handed out flyers, inviting Baptist delegates to a prayer vigil for abuse victims and urging them to support Rev. Burleson’s predator database motion. It was 95 degrees. I was drenched and dripping. Another SNAP member was feeling the heat and sitting under a tree with water. Those trees in the plaza were precious. We all tried to stay in the shade as much as we could.

Two street cops had already told us we were fine, but a non-uniformed guy showed up and told us we had to get off the plaza and move to the sidewalk – in the full sun. Another SNAP person insisted on seeing his badge, and I asked him about why we couldn't stand in what was clearly a wide-open public-access area. He explained that the SBC had rented the entire convention center and that included the entrance plaza area, and so they were entitled to have us removed from the premises. I couldn’t believe it. It seemed so small and mean-spirited.

You might imagine that good Christians would have been sending out water bottles to a group of clergy abuse survivors leafletting about a prayer vigil. But no.... they chose to push us from the shade into the sun.....and it was a very, very hot day. [For an interesting perspective, read the view of a San Antonio columnist – “Southern Baptists are convening: will any Christians be with them?”]

A TV camera crew stuck around, and I was grateful. I couldn’t help but wonder....if the camera crew hadn’t been there, would Southern Baptist officials have had us handcuffed and hauled off in a paddy wagon?

A threat
Just a couple weeks ago, a man who has long worked as an attorney for the Baptist General Convention of Texas contacted an attorney friend of mine to suggest that, if I didn’t rein it in, I might find myself facing a lawsuit or a state bar disciplinary proceeding. It was a chickensh** threat delivered in a chickensh** manner.

No one who heard about it could figure out what possible grounds he could even conceivably have, but of course, if you’ve got money and power, who needs grounds? Most of the time, a threat will silence someone...and the mission will be accomplished regardless of whether there are any realistic grounds.

I don’t know whether this man was acting at the behest of someone at the BGCT or whether he was acting simply at his own behest. But I think the conduct is par for the course. There have been too many attempts to silence clergy abuse victims. And I couldn’t help but notice the timing of it.... But it’s enough just to see the ugliness of these kinds of deeds, without having to also ponder the possible ugliness of the thought processes that lead up to them.

Ugly response to abuse survivor
A clergy abuse survivor poured her heart out in an email to SBC president Frank Page. She told, not only about the horror of her abuse by a pastor still in ministry, but also about the anguish of trying to get someone in the denomination to protect others. She ended by asking Page to please talk with some of the people who are trying to get things changed so that other kids won’t be hurt like she was.

In his short response, Page said this: “There are people who are trying to paint a picture of me and our Convention which is patently untrue. In fact, some of the groups who are doing this are nothing more than lawyer groups, looking to raise their caseload level. They are not truly trying to help people in any way other than raise lawsuit possibilities.”

Well....isn’t that just lovely? Page effectively bad-mouths the survivor groups who offer peer support for clergy abuse victims, but he doesn’t offer any alternative form of ministry or any referral for any other sort of counseling. He makes a perfunctory “deeply saddened” comment, but his message doesn’t show any real grief for the victim...and doesn’t offer any help. (Another SBC official also responded and castigated SNAP and StopBaptistPredators by name.)

Page’s little rant shows his ignorance of the survivor support groups. SNAP has over 8000 members, and if SNAP wasn’t “trying to help people in any way,” then why would SNAP bother with having more than 50 support groups across the country where clergy abuse victims gather to share with one another in person?

Here’s the real truth. With countless hours of volunteer labor, SNAP members work hard to bring clergy sex abuse into the light of day because most of us would do almost anything to try to spare some other kid the horror of what was done to us...and of the traumatic impact of it....and of the continuing deep hurt that is inflicted by a faith group that so completely turns its back on the wounded rather than seeking to bring in the lost sheep. That's what motivates virtually every SNAP person I know.

This victim kept Page’s email confidential for months, because Page asked her not to share it without his permission. But ultimately, she was able to see for herself what was and wasn’t true, and she forwarded the emails to SNAP. She didn’t need anyone else...including Frank Page...to paint a picture for her. She had her own personal experience at trying to report clergy sex abuse within the Southern Baptist denomination and she saw for herself the horror in how it’s handled.

The warmth of a few individuals
A handful of Southern Baptists made a genuine, personal effort to reach out behind the scenes and to talk with SNAP members who were at the convention in San Antonio. It’s sad that their warmth seemed so exceptional. And in fairness, that handful of caring Baptists was like the hand of a carpenter - missing a digit or two. But though they were few in number, to those few, I say a heart-felt thank-you.

Posted by Christa Brown at 5:43 PM

These are not actions of people who are kind, caring, or loving. They sound like people who are cold, callous and pompous. Keep on sharing the things they do and say.

The behavior of SBC ministers was unbelievable to me at the time of my personal experience of repeated inappropriate sexual misconduct by the children's minister that I worked for. That unbelievable behavior is not limited to a few. I just want to say thank you to Christa, David, and all the other SNAP volunteers and victims, who endured the disdain, warnings, and extremely uncomfortable circumstances to be present at the SBC convention. You were there on behalf of all those who have suffered and will suffer in the future at the hands of sexually abusive clergy, if action is not taken to stop it.

As I have said before, The leadership of the SBC will protect both the institution and themselves before considering to do the right thing.