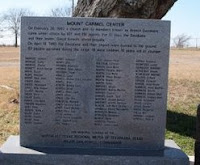 Remember David Koresh? He was the leader of the Branch Davidians who were put to siege by the U.S. government back in 1993. Dwayne Walker, who blogs about the sex-abuse and cover-up scandal at Trinity Baptist in Jacksonville, recently visited the ruins of the Branch Davidian site. His reflections on it are interesting and insightful, and so I’ve reposted an excerpt below. You can read the entirety of Dwayne’s posting here.

"I took a walk through the ruins of the church and residence of David Koresh, aka Vernon Howell, today….

As I looked at the memorial, and read the names and ages of those who lost their lives in the fire, I could not help but remember the original reason for the inferno. The raid was not just for weapons, but to 'protect children'. Children who had allegedly been abused by VH. Yet, as heinous an action as that was, I can't help but wax a bit sarcastic.

It just shows how unprepared we are to deal with the issue of child abuse and molestation. It seems that the only methods we have of dealing with victims of child abuse is to either ignore 'em, blame 'em, or incinerate 'em.

The ruins of the so-called compound actually seemed to be the size of my grandmother's house! The property of Trinity Baptist Church at 800 Hammond Blvd in Jacksonville, Florida, is far more of a compound than the ranch where Vernon Howell lived with his friends, followers, and family.

If it sounds like I'm going easy on Vernon, let's get a few things straight. After the inferno at Waco, we saw both mainstream religious periodicals, and evangelical periodicals, address this in articles that emphasized the beliefs over child molestation.

After Bob Gray was arrested in May of 2006, I could not help but notice the loud silence from Jacksonville's evangelical community, let alone the nation at large, over the problem of pedophiles in our nation's pulpits. Only Evangelist Don Boys seemed willing to broach the subject regarding Bob Gray.

If a victim from the Branch Davidians, or any other group commonly referred to as a 'cult', were to appear at Trinity, or any other evangelical church, you know their testimony of abuse would be embraced! People would throw their arms around those victims, coddle them, listen, and do all the right things, simply because they make the opposition look bad!

What happens when evangelical leaders are caught doing the same things VH was accused of? Silence. Certainly no tanks or infernos. I am not advocating that, by the way.

What I am saying is there is a double standard regarding how we deal with ministers who abuse children. If they come from a group that established leaders have labeled a 'cult', they'll roll out the red carpet for them. And possibly even dedicate a Sunday evening service to the 'threats posed by un-Christian cults'.

Where is this concern when it's one of their own?

The word 'cult' has no relevance to me anymore. I cannot, in good conscience, use that word anymore to describe any group with unique, strange, or odd views. It's all about abuse. Period. Not beliefs.

....The monument at the top of this tells us eighteen children died at the siege…. Fundamentalists seized upon the moment to savage the Clintons and Janet Reno, and claimed to shed tears for the children who died.

Where are the tears for those abused by the late Bob Gray? For those who had suicidal thoughts? Did any of BG's victims commit suicide? If they did, how would we know? Did they suffer in silence?"

Posted by Christa Brown at 1:32 PM