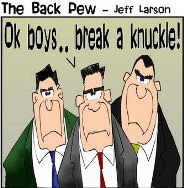 A clergy abuse victim recently had second thoughts about disclosing an email she got from a top Southern Baptist official. Why? Because she feared he might retaliate in some way.

Isn’t it sad that abuse victims would have to fear retaliation by religious leaders? Yet, I’ve heard this same fear expressed by quite a lot of abuse survivors. It’s not at all unusual.

In fairness, I don’t personally believe that the particular Southern Baptist official who was involved this time would have been one to retaliate. But I nevertheless consider this to be a legitimate fear for Baptist abuse survivors.

After all, what are Baptist abuse survivors supposed to think when they see the head of a Baptist seminary calling a victims’ support group “evil-doers”?

[SNAP’s founder said that, in almost 20 years time, no church official in any other faith group had ever before called SNAP "evil." It took a Southern Baptist leader to stoop that low.]

And what are Baptist abuse survivors supposed to think when they see a former Southern Baptist president saying that the survivors’ support network is “just as reprehensible as sex criminals”?

What are Baptist abuse survivors supposed to think when they see the current Southern Baptist president publicly castigate the victims’ support group as being “opportunistic persons”?

What are Baptist abuse survivors supposed to think when they see that the long-time attorney for the largest state-wide Baptist organization in the country will threaten to sue the victim who brings a substantiated report of abuse, rather than doing anything about the perpetrator?

What are Baptist abuse survivors supposed to think when they see that a survivor who attends an SBC committee meeting gets called “a person of no integrity” while every other committee member sits silent and allows it?

What are Baptist abuse survivors supposed to think when, over and over again, they write to state and national denominational officials and their letters are ignored or treated dismissively…while their perpetrators remain in their pulpits?

So why shouldn’t Baptist abuse survivors believe that Southern Baptist officials are more likely to hurt than help?

When Southern Baptist officials can realistically answer that last question and can show abuse survivors why they should turn to them for help, then perhaps abuse survivors will begin to stop fearing them.

Of course, Southern Baptist officials will also need to stop with the trash-talk, and they owe some apologies. But I’m not holding my breath.

For now, I think the instinct of most abuse survivors is exactly right: Southern Baptist officials are more likely to hurt than help.

Posted by Christa Brown at 3:49 PM

My response...I was also told my reputation would be ruined if I told what happened to me. I was also told that I would be crucified if I took it to court and told the ministers would pull their wagons in to protect themselves. I had to remind myself that I did not cause this or do anything to make this happen.

I took a self defense class. The instructor told us to strike him in the Adam's apple as hard as we could. It is not in my nature to hurt anyone and I did not think I would be able to do it. But when the time came, I imagined the minister that I complained about. When the instructor was finally able to talk and breathe, he said he had never had anyone strike him so hard. I smiled. I felt empowered.

I followed the link to the EthicsDaily.com article about Paige Patterson's emails in response to the abuse victim.

Not only did Patterson's emails show him to be a bully, but they also revealed him to be an abysmal theologian. Of course, what else do I expect?

I love that. A bully and an abysmal theologian. Amen and amen to that!