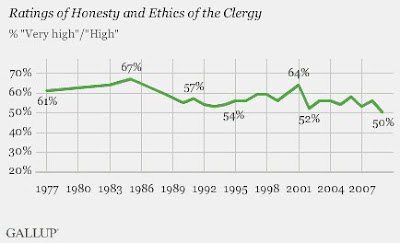 According to Gallup’s annual Honesty and Ethics of professions poll, “the percentage of Americans rating the honesty and ethics of clergy as ‘very high’ or ‘high’ is down to 50% in 2009.” This is the lowest percentage it has been in the 32 years that Gallup has measured it.

“Ratings of the clergy dropped from their 2008 levels among both Catholics and Protestants, as well as among regular and non-regular churchgoers.”

Personally, I think it is good that people are beginning to view clergy with a greater measure of skepticism. That sort of skepticism may serve to make kids safer.

And note that the skepticism is rising among both Protestants and Catholics. That too is good. Maybe it is, in part, a sign that people are beginning to understand that clergy sex abuse is not just a Catholic problem. After all, the honesty and ethics rating for clergy has now dropped even lower than it was in 2002, the year that most consider to have been the peak of the Catholic clergy sex abuse crisis. Yet, the public’s perception of clergy has continued to slide even further downward . . . perhaps because the slide now affects all clergy.

Other sorts of professionals recognize the trust and power their status confers, and so they try to protect the public by monitoring members of the profession. For example, a lawyer need not be convicted of a crime in order to have his professional status removed. The profession itself, through review board processes, can consider a lawyer’s conduct and can choose to discipline, suspend, reprimand or even disbar him.

Such a professional review process is what’s needed for Baptist clergy. As things now stand, a Baptist minister can remain in the pulpit unless and until he’s thrown in prison. That’s a remarkably low standard, and it leaves far too many hazardous people in positions of high trust.

Heck … Baptist clergy don’t even have any sort of entry hurdle for the profession. No special training or degree is required, nor any sort of certification. Baptist clergy aren’t even required to go to seminary, like clergy in many other faith groups.

The only thing needed for a Baptist pastor to gain entry to the profession is to convince a group of people that he was “called by God.” Because most of them are, by nature, pretty good talkers -- they are, after all, preachers -- it’s the perfect set-up for con-men.

Of course, most preachers are not con-men. And many may indeed be “called by God.” But surely all of them are not, and it’s unsafe to simply take their word on it, without any system for professional oversight.

After all, the very thing that makes clergy predators so awful is the fact that what they prey on is people’s goodness. Most other sorts of con-men prey on people’s weakness. For example, they might prey on a person’s desire for an easy buck. But clergy-con-men are just the opposite. They exploit the good in people. They prey on people’s faith and trust. They prey on the faith of their young victims in order to abuse and violate them. And they prey on the trust of the congregation to get away with it.

And unlike virtually every other sort of professional, Baptist clergy have no system of oversight. There is no place to turn when things go terribly wrong.

Thank God people are waking up to the need for greater skepticism of clergy! Maybe when the largest Protestant denomination institutes clergy oversight systems, then clergy may be a bit more deserving of trust.

Update 12/11/09:
See also “Clergy drop in poll rating honesty and ethics of professions,” and in the Sacramento Bee, a timely article on the "increased awareness" of "pastors' spiritual abuse."

Posted by Christa Brown at 5:35 PM

Former Jacksonville pastor Darrell Gilyard has admitted fathering the child of a woman who said he raped and impregnated her during a 2004 counseling session, court documents show.

Richard: Thanks for the update on the Darrell Gilyard saga. I've now got the news posted as a lead story on the StopBaptistPredators website.

You are quite welcome. Although I am an infrequent commenter, I am an almost daily reader. I feel it is the least I can do to help your "David versus Goliath" cause.

You're being realistic, again. I don't think there's a 12-step program for that;-D