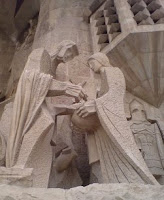 Easter has come and gone, and I’m still thinking about Pontius Pilate.

Remember Pilate? He was the powerful Roman leader who thought he could simply wash his hands of an innocent’s blood by shoving responsibility onto others.

“I find no fault in this man.” That’s what Pilate said when he spoke the truth of his heart.

But as he worried more and more about his own power, he violated the voice of his conscience.

Pilate had the power to release Jesus. But instead he washed his hands and allowed others to crucify Jesus.

Perhaps Pilate didn’t dictate that Jesus should be crucified, but he allowed it.

He made a choice.

We know what Pilate decided. He protected his power and turned Jesus over to the crowd.

But before he did it, Pilate made a show. He had a wash basin brought out, and he stood before the crowd washing his hands.

Nowadays, that’s what we remember him for -- the show. He made a big display of not liking what the crowd wanted, but then he washed his hands, turned his back, and allowed it to happen.

Southern Baptist leaders make a big display as well. They preach against clergy sex abuse, but ultimately, they allow it to happen.

They bring out a big wash basin.

They hold power, but they shove responsibility onto others.

It’s as though they all have Pontius Pilate syndrome.

Rather than use their power for the protection of innocent kids -- a power they have surely shown when other issues troubled them -- Baptist leaders choose to do nothing. They wash their hands of clergy sex abuse and leave the problem up to the crowd.

They turn the safety of innocents over to the 44,000 local churches to deal with on their own. . . as if each of those 44,000 churches could even begin to have the resources to effectively fight this internal terrorism.

By washing their hands and shirking responsibility, Baptist leaders allow clergy-predators to roam among their churches. They avoid putting themselves at risk, but their self-protection comes at the cost of kids’ safety.

Of course they don’t listen to the cries of the wounded. They listen to lawyers and public relations people whose advice on how to handle clergy sex abuse has transformed the Southern Baptist Convention into a corporation focused on protecting its assets rather than protecting its flock.

I wonder if Pilate also had lawyers and PR people whispering in his ear.

Make no mistake about it: Southern Baptist leaders have a choice. And so far, they have chosen to protect themselves over protecting kids.

They may wash their hands of this, but they cannot cleanse their hearts.

These are men who hold the power to make kids in Baptist churches a great deal safer. But they remain passive.

They simply wash their hands of all of it.

Among Catholics and other faith groups, we have seen leaders who failed miserably in the exercise of their designated responsibilities. When the lines of responsibility are clear, the blame is easier to assign.

But is it any better to have leaders who utterly refuse responsibility?

Did “washing his hands” purge Pilate of his guilt for allowing the crucifixion of Jesus?

By refusing to even keep records on credibly-accused clergy, Southern Baptist leaders allow the clergy-predators to easily find new prey.

By washing their hands of it, Baptist leaders allow that many more kids will have their bodies and souls rendered asunder by those they trust the most.

I don’t think there’s a wash basin in the world that’s big enough to take away their guilt.

Maybe it is time to change the referance from "Baptistland" to Pilateland". Just a thought.

I am glad that Christa and others have had the strength to stand up and tell and to try to bring about changes to help others. The amount of pain that this puts her through and the strength she shows is so great, words are not enough to thank her and the others for the changes they are trying to bring about. But she is brave enough and strong enough to continue because she cares. Why do Baptist Leaders not care enough to make more of an effort to fix this problem how many more lives hurt - how many more tears how much longer until enough people speak up and change things start to put the safety of so many young lives as a priority