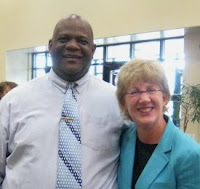 It’s the Sunday before Thanksgiving and my heart is filled with gratitude. At the invitation of Rev. Dwight McKissic, I spent the morning in a joy-filled worship service with the people of Cornerstone Baptist Church in Arlington, Texas.

This was the first time that any Baptist church has actually invited me to speak. So this 3,000 member congregation is something special, and they have a pastor who carries a genuine concern for the problem of clergy sex abuse.

For over 4 ½ years, I’ve been writing and talking about this subject that a whole lot of Baptist officials, Baptist pastors, and Baptist people seem to not want to hear about -- Baptist clergy sex abuse and cover-ups. It’s not a pleasant subject -- I know. But I also know that, if kids in Baptist churches are going to be made safer, we need to do a whole lot more talking about it. 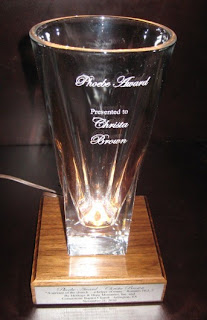 That’s why I was both surprised and glad when I received Dr. McKissic’s letter of invitation. He also said that Cornerstone wanted to honor me with its “Phoebe Award.” It’s an award that Cornerstone gives out every 3 to 5 years “to a person who has made a difference in our world; someone who stands up for truth and right.”

For a moment, I confess I was flat-out dumbfounded. I looked again at the name on the letter. Sure enough – he was talking to me.

This was something dramatically different from all the ugly-talk that I’ve gotten from so many others who carry the “Baptist” name. So I decided to accept their gracious invitation and to go visit the people of Cornerstone.

They were warm and welcoming, attentive and caring.

Many people have told me that “Baptists are hopeless” when it comes to dealing with clergy sex abuse. I have had many moments of believing it. But when I meet Baptists like Dwight McKissic and the people of Cornerstone, it renews my hope.

I yearn for a future when kids in Baptist churches will be a great deal safer.

I yearn for a future when Baptist clergy abuse survivors will be received and heard with compassion and care.

I yearn for a future when clergy accountability systems will seem as "right as rain" in Baptistland.

I know that we still have a very long way to go before these dreams become reality. And perhaps it won’t happen in my lifetime. But like many others who have gone before and who will come after me, I feel as though we are working to plant seeds of change.

Today, I was very happy to be able to plant those seeds, standing side by side, with the people of Cornerstone. Someday, perhaps many years yet into the future, those seeds will grow into strong trees whose wide and sheltering branches will give safe sanctuary for the kids and congregants of Baptistland.

On a more personal note, today was a “first” in another way. Except for funerals, this was the first time I have set foot in a Baptist church in more than 30 years. I am grateful to the people of Cornerstone for welcoming me.

Update 3/5/11:
I packed away the award into a box and put it in storage. It became too sad to even look at it. I have come to the belief that, with only the rarest of exceptions, Southern Baptist pastors simply will not hold their own accountable. Cronies protect cronies. Why should anyone expect Southern Baptist pastors to hold other pastors accountable for sexual abuse when they won't even hold their highest denominational officials accountable for harsh, cruel written public rhetoric? On this issue, Baptist pastors are plagued by fawning tepidity. That's how it is in Baptistland.

My heart is over flowing with joy! Thank you Rev.McKissic and the people of Cornerstone Baptist church for honoring Christa in such a respectful and appropriate way! What a wonderful example you have set for other churches! What a beautiful door you have opened.
Christa Brown's stand for truth and right was with great sacrifice but she continues to be a servant and helper.
Christa has never been the ugly things she was accused of by many in Baptist leadership. How significant it is that Christa has finally been welcomed back into a Baptist church, finally shown the dignity she is so deserving of, and honored for her mission to protect others from clergy sexual abuse. It is a day to be thankful!

I am very happy to see this. I so hope that this will influence other pastors or women's groups to do the same, so that more and more and more people in the pews can hear, and then require change in how these things are handled.

What a great moment and well-deserved recognition. Congratulations.

Way to go both Dwight and Christa!

Cornerstone has a face book page where messages can be left for the pastor and church members.

“Education's purpose is to replace an empty mind with an open one.” --Malcolm S. Forbes

Many thanks to Rev/Dr. McKissic and the Cornerstone Baptist congregation. This is what true christianity is about - acknowledging truths about our world and identifying remedies.

It is my hope and prayer that Cornerstone is the first of thousands of spiritual awakenings in "Baptistland" where the subject of clergy sex abuse is concerned.

May this surprising invitation plant the seeds among many to support Christa's message until it becomes the message of Baptists across all state conventions.

The time for healing needs to start immediately.

Great news! Dwight McKissic is one minister in the SB that I have the highest respect for. This is just one of the reasons why. Congratulations to you too Christa, it's a award long overdue and so very deserved.

Great news Christa. Congratulations to you.

Way to go Christa! Well deserved recognition, and thanks to Rev. McKissick!

Christa, I echo the support you've received here. I just read the blog and wanted to offer my congratulations!! Woohoo!!! Thank you for your tireless efforts to provide education about clergy sexual abuse within Baptist churches and to make changes in the infrastructure so that children and families can be safe. I admire you for all you've done! I'm thrilled that Dr. McKissic invited you to speak and that Cornerstone Baptist Church gave you this well-deserved award. It encourages me to read about Dr. McKissic and his congregation. It gives me hope that some Baptists DO care enough about their children to stand up for them. Congratulations, Christa!! Thank you for all you do!!

Christa! This is wonderful, a miracle, an answer to prayer, something I never thought would happen. What a season of Thanksgiving. I must find out more about this church and this pastor. Is it possible there could be hope for Baptists after all. Thank you again for all you do and have done. Take care

Excellent Ms. Brown, just excellent. Thank you for the service you continue to provide to the body of Christ!

Incredible! What a great way to go into the holiday season - rejoicing over one church that has the right goal in mind! What an awesome turn of events! How incredible not only that they opened their doors and hearts, but also recognized you for all that you have done for this cause!

Thank you Rev. McKissic and Cornerstone for going against the tide - thank you for opening this door! Thank you Christa!