SBC Execs Have the Power 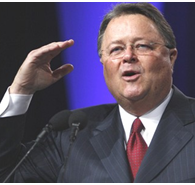 At the end of 2010, I was looking back at some of the year’s big Baptist stories, and I paused over Morris Chapman’s remarks about the Southern Baptist Convention’s Great Commission Resurgence Task Force.

Morris Chapman, the former president of the Executive Committee, opposed the proposals and published his reasons. This is where it gets interesting.

Compare these remarks to what was said in 2008 when the Southern Baptist Convention’s Executive Committee refused to implement safeguards for the protection of kids against Baptist clergy predators. The Executive Committee claimed it had “no authority to bar known perpetrators from ministry or start an office to field abuse claims.”

And how can any entity carry “enormous responsibilities” of “enormous importance” if it is not also afforded “authority”?

The obvious answer is that the Executive Committee is indeed “empowered to function” on behalf of the Southern Baptist Convention. If it wanted to, it could choose to implement strategies, similar to those in other major faith groups, to bar perpetrators from ministry and to assess abuse claims that cannot be criminally prosecuted (which is most of them). The problem is that the honchos who head-up the largest Protestant denomination in the land have not yet seen the “enormous importance” of protecting kids against clergy predators, and of ministering to those wounded by clergy abuse. So, whenever that topic is raised, the Executive Committee shifts into its self-serving “no authority” posture.

This is the denomination whose officials hold a crafty “now you see it – now you don’t” sort of power. But make no mistake about it – even when they choose to mask their power, the power is still there.

“The Executive Committee houses and maintains SBC.net and all of its family of Web sites, including … Church Search and Job Search. The SBC is the only denomination to receive, completely free (paid for by the Executive Committee, CP-supplied budget) such comprehensive service in these areas. All cooperating churches have a web presence… and the ability to post open positions for qualified job applicants.”

That’s where the Executive Committee chooses to wash its hands of the problem and claim “no authority.”

But make no mistake about it – the Executive Committee is making a choice with its do-nothing response. It’s not that it can’t; it’s that it won’t. It is, after all, “empowered to function” for the benefit of the Southern Baptist Convention as a whole.

The Executive Committee is “empowered to function” for the benefit of the Southern Baptist Convention. If it wanted to implement strategies for better protecting kids and congregants against clergy sex abuse, it could readily choose to do so. The fact that it doesn’t means that it carries not only "enormous responsibilities" but also enormous shame.

What it means is that the Convention and it's messengers mean nothing. It's more a show than an actual meeting. It creates huge revenue for whatever city the Convention is held in. But the messengers, the voting, the debates, all of it mean nothing. The committees have all the control and Southern Baptists say nothing. They either quit going or keep going for the reunions. That's it.

Until the churches actually mean something to the SBC as a whole, until the messengers are seen as having more than just a voice but able to take action it will always be that way.

You can't "win the world" for Christ if you refuse to protect the most innocent and vulnerable. I'm concerned about the true condition of their souls. They certainly don't bear the fruit.

I bumped into this site by chance.I am a muslim and that means I have the most in common wiht christians.
Sadly when the religion tells Jesus died for your sins it tells the followers that you have licence to do what you want and don't worry.Religion means spirituality and spiritualtiy comes with selfcontrol and sacrifice(or suffering).Earlier christians lives were full of such sacrifices but the present ones have changed the religion of Jesus to keep on doing everything without any remorse.It wouldn't change until and unless people will not come to the real teachings of Jesus.When I read the redletter words in bible I couldn't find anywhere written in clear terms that Jesus himself said,I amd God or worship me,nor is written that I came to die for the sins of mankind.

I guess it will all keep rolling along until the messengers stop giving money. As long as they're giving money, why should the "leaders" do ANYTHING differently?