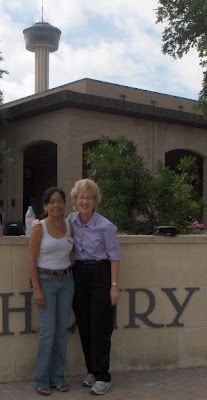 With SNAP at the Southern Baptist Convention, I had that feeling of having come full circle. SNAP’s San Antonio leader is Barbara Garcia Boehland, a mom whose son didn’t survive the trauma of clergy sex abuse. He committed suicide.

Barbara works tirelessly with SNAP so that what happened to her son will be less likely to happen to other people’s kids. She is a person of extraordinary commitment, and I felt so honored to stand with her.

Barbara was at the very first SNAP meeting I ever attended back in 2004. It was a meeting I nearly didn’t go to, and even when I went to the building, I nearly didn’t walk in the room. After peeking in, I turned away. But Rob stepped out and called to me. So, I went in and sat in the circle of chairs.

Rob started talking, and told a bit of his story. And then the circle went to Miguel. And then it went to Barbara. She told about her son, Eduardo.

That was when the dam quietly broke inside my head, and the murky waters started flooding in. I just couldn’t hold it all back anymore.

The circle continued around. In every person’s story, I heard little pieces of my own life, and I knew we shared something terrible.

When the circle came around to me, I managed to choke out 8 words: "I was sexually abused by a Baptist minister." That was it. After that, my whole throat clamped shut. I opened my mouth but no sound came out. I could scarcely breathe, much less speak.

Rob quietly said, "Thanks for sharing, Christa," and he moved on around the circle.

In San Antonio last week, I felt as though the circle had come around again when I saw Barbara. And I thought about how far I had come in being able to speak of the unspeakable.

It’s a journey for all of us, folks. Now I speak. But it was only a few years ago that I was literally voiceless.

To every survivor out there, I bid you Godspeed for your own journey. Keep on healing, and raise heck when you can.

Posted by Christa Brown at 4:30 PM

May God bless you and give you the faith, will, and determination to press forward and enlighten those you are in the dark about how serious this problem is.
John

Thanks for your Blog. It is both informative and helpful.