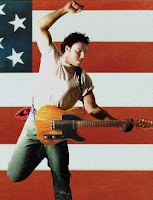 Some of you have asked me how I manage to keep my equilibrium when Southern Baptist leaders sling so much mud my way. I thought about that question again a few days ago when it was reported that “media staff at a large, moderate Baptist state convention” referred to me as “that woman” while criticizing clergy sex abuse news coverage.

It’s not hard to guess which state convention that was. I figure it’s probably the same one that likes to brag so much about how enlightened it is on clergy abuse. Laughable, huh?

Their “that woman” slur is a stupid one. It reflects poorly on them, shows them for who they really are, and makes them seem like cartoons.

So here’s the truth about how I cope with it.

I put on my headphones, plug in the Bruce Springsteen playlist, and crank up the volume about as loud as I think my eardrums can stand. Then I head out for a run.

By the end of the run, I’m usually feeling pretty good. And I’m starting to get stronger on the hills. Guess I ought to say thanks to Southern Baptist leaders for that. Turns out their insults are a motivational force.

“No retreat, Baby, no surrender.” (Bruce Springsteen on Born in the USA)

Posted by Christa Brown at 8:36 AM

No retreat baby, No surrender!!

That needs to be the motivating call we give to each other and to the world!!!!

(don't know if I can handle the ear phones or if my knees can take the pounding ....but I am a great cheerleader!!)

So when we feel like we are falling in the pit of dispair or self loathing.....
No Retreat Baby!! No Surrender!!

Thanks again for new inspiration, Christa!!

I think I can hear you cheering even from here, gmommy! Way to go! No retreat! No surrender!