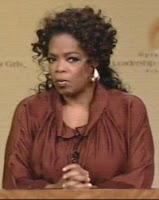 A dorm matron was charged with sexually abusing 13 to 15 year-old girls at the Oprah Winfrey Leadership Academy for Girls outside Johannesburg.

When the allegations first arose, Oprah immediately went to the school in person. She took her own investigators and counselors. She set out to get to the bottom of it, and she assured the girls of her unwavering commitment. She apologized to the girls and their families.

Though Oprah herself was not responsible for hiring at the school, she still took responsibility and she took action. After all, the school bore her name.

“I am prepared to do whatever is necessary to make sure that the Oprah Winfrey Leadership Academy for Girls becomes a safe and nurturing and enriched setting,” she said.

With such strong and immediate action, Oprah sent a clear message.

To the girls, her message says that what was done to them is a matter of consequence, and that their humanity and dignity are precious.

To perpetrators and those who turn a blind eye, her message says that they will indeed be held accountable if they work at an institution that carries the Oprah Winfrey name.

What would it be like if the actions of Southern Baptist leaders sent the same sort of message? It’s hard to even imagine because, so far, they simply don’t choose to take action.

But by their inaction, they also send a message. It is a very different sort of message and one that makes a heresy of the Southern Baptist name.

By their inaction, Southern Baptist leaders tell clergy abuse victims that what was done to them is a matter of no consequence, and that their humanity and dignity carry no worth.

These are tragic messages that are being communicated daily by the inaction of Southern Baptist leaders.

Why can’t Southern Baptist leaders provide churches with a professional investigatory body that would responsibly look into clergy abuse allegations?

Why don’t they reach out to those who report clergy abuse and treat them with dignity, compassion, and care?

Why aren’t they just as committed as Oprah to assuring that Southern Baptist churches are safe and nurturing settings?

Why don’t they care as much about the Southern Baptist name as Oprah cares about her name?

Posted by Christa Brown at 6:18 PM

I still say that all SBC leaders who turn a blind eye and refuse to hold clergy perpetrators accountable, are those men/women who are sexual abusers themselves or are people who have been sexually abused but refuse to deal with it. Why else would an entire group of people continue to hide their heads in the sand and refuse to accept the fact that there is a serious problem in their churches.