It shouldn't take a murder 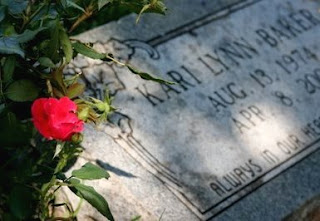 Kari Baker’s mother, Linda Dulin, delivered a victim impact statement in which she said this: “You took her from us, Matt. You discarded her like she was yesterday’s trash. You murdered the mother of your children. . . . You spent your life preying on innocent people. . . .”

So there it is: After a lifetime of “preying on innocent people,” and after always getting away with it, Matt Baker murdered the mother of his children.

I guess he thought he could get away with that too.

In today’s sentencing phase of the trial, prosecutors presented some of the evidence about Baker’s lifetime of “preying on innocent people.”

They couldn’t present all of it because, as they explained, some people were out of town for today’s hearing. But prosecutors had already given official notice that they had evidence of at least 13 young women, including 4 minors, toward whom Matt Baker had made inappropriate “advances” and assaults.

Though some of the allegations had been previously reported to various Baptist officials, none of them had prevented Matt from continuing as a Baptist minister. In fact, the sexual abuse and assault allegations didn’t see the light of day until Matt Baker was brought up on a murder charge.

Is that what it takes in Baptistland?

Does it take a murder charge before people in the pews can learn about such ugly clergy conduct as sexual abuse and assaults?

Lora was among those who testified at today’s sentencing hearing. Back in 1991, she was the freshman girl who reported Baker to Baylor University officials for what was a sexual assault. But according to her testimony, “Baylor officials told her there was no need to contact the police because they would handle it.”

Baylor University is the largest Baptist University in the world. So how did they “handle it”?

As reported by Texas Monthly magazine, Baylor University “administrators did type up a report, but they took no action.”

A few years later, Baylor even admitted Matt Baker into its renowned Truett Seminary on the Baylor campus. Did Baylor officials not see the report in their own file? Or did they just not care?

And why didn’t they find out about some of the other sexual abuse allegations that had been made against Matt by then?

After all, at First Baptist Church of Waco alone, there had already been two sexual abuse allegations against Matt. The pastor and another minister received separate reports. In one, Matt was reported to have grabbed a female custodian, and in the other, he cornered a teenage girl.

With the assault report at Baylor and the two abuse reports at First Baptist, you’d think someone would have put a stop to Matt Baker’s ministerial career then and there. But no . . . in Baptistland, no one bothers to look into such things, and an accused pastor simply moves on to greener pastures. Matt Baker moved on to one of the most prestigious churches in Waco, Columbus Avenue Baptist Church.

From there, his career continued through a string of other Baptist churches and organizations . . . and still more allegations arose.

But no one ever stopped him.

With the exception of the YMCA (where he had multiple abuse allegations) and the Waco Center for Youth, all of those churches, schools and organizations are affiliated with the same umbrella organization -- the Baptist General Convention of Texas.

Wouldn’t you think they could have some system for keeping track of abuse allegations?

Wouldn’t you think their affiliated entities could communicate with one another?

But apparently they don’t. Even at the end of his career -- and even after so many abuse and assault allegations -- Matt Baker got a job working with college kids at a Baptist Student Union. It was a position funded by the Baptist General Convention of Texas itself.

Investigative journalist Scott Hollandsworth offered an explanation for this huge institutional failure. He pointed out that, among Baptists, “there are no rules” requiring a church to inform others about a minister accused of abuse. “In fact,” he explained, “to avoid defamation lawsuits, leaders of a church have an incentive to keep their mouths shut when it comes to questionable behavior among clergy, which is perhaps why First Baptist officials said nothing about the allegations when other churches later called, interested in hiring Matt.”

So that’s how it works in Baptistland. Church leaders just “keep their mouths shut,” and predatory ministers simply move on.

This closed-mouth system is flat-out dangerous. It shouldn’t take a murder to bring to light a pastor’s career history of “preying on innocent people.”

For more on the history of abuse and assault allegations against Matt Baker, see my prior postings, “Baptist leaders silent at the start of trial” and “Why didn’t Baptists bust him?” For links to all of my 12 columns on the Matt Baker case, see the bottom of this posting.

1/25/10: The list of places Matt Baker worked is derived from information gathered and reported by Texas Monthly magazine.

Posted by Christa Brown at 9:27 PM

Glad at least one has been put behind bars. Surprised. But then...
it took murder.

Please...don't kid yourselves. Not even murder will impress upon Baptist leadership the importance of abandoning their strident attitudes about local church autonomy, when it comes to identifying clergy sex abusers. At the risk of repeating a theme of past posts, if Kari Bakers family will find a good, smart, corageous lawyer and sue the Baptist General Convention of Texas, that may cause some heads to turn. If BGCT is culpable, make them pay...and pay dearly. If such a lawsuit bankrupts that organization, I believe other Baptist organizations will suddenly discover ways to identify, track and report clergy sex abuse. That may seem like too many "ifs", but remember, these guys have already demonstrated they are not concerned about ethics and morality surrounding this issue, it is all about protecting image and offerings. It's about the money. Seriously threaten that and perhaps they will "discover a new way to be Baptist."

Ministry is a great place for predators. This guy would have been ousted from a public school in no time.

So better to trust the 'world' than the Christian institutions for safety.

I agree with Jim, they will only see the light when it hurts their pocketbook. Otherwise, they could care less. It is all about image.

The murder trial last week and eventual conviction of the SBC pastor for murdering his wife is sickening. I want to publicly thank Christa Brown for her work in keeping us all informed on this issue. I am familiar with the Gilyard case, and have written extensively about it. Likewise, the Klouda case. I have only become recently aware of the details of this Waco murder case.

I agree with Lydia that when the treatment received by Sheri Klouda is ignored by her superiors, it makes it easier and easier to ignore other things.

This murder in Waco, however, is absolutely sickening. Particularly when you read the transcripts of the witness statements (the pastors' girlfriend) and victim statements at the time of the convicted murderer's sentencing.

Somebody really high up in the SBC needs to issue some kind of statement that takes responsibility for letting this pastor slip through the cracks when attempted rape and other sexual crimes were reported to religious authorities, but nothing was done to him.

You wonder if those of us in a position to do something to stop people like this from advancing in the SBC, but don't do anything to if we become acclompices to murder. I'm trying with motions for a data base for those ministers credibly accused or convicted of sexual misconduct, but I don't know where to turn now.

Wonder why he did not get the death penalty? He will be out in 20 years...

Wade,
I trully appreciate all you hav done to raise this issue to the attention of the leadership. You efforts have not goneunnoticed nor do I believe unrewarded.
Is there a group of SBC pastors,ministers, ect, that as a group ae trying to influence the Conventon? As a retired pastor I would think that a group of their own d not be so easily dismissed as they have so rudely done Christa and others. If there is cold you please infrm me. If tee is nodo yu think such a group would have any merit?
Thanks again.
Christa, great job covering what must be a sickening responsibility.

Christa,
This is Shannon from the www.dontevengetstarted.blogspot.com blog about this case. I have something that I think you can help me with.....or at least point me in the right direction. I wasn't able to bring up your email address in my broswer to email you. So hoping you see this comment here. You can email me at JusticeForKair@gmail.com.
Thanks!!!

Yep...ya see? This is the reason why a HOST of us Believers are getting away from organized religion. It's TOO embarrassing to be a part of. Even when things are going "morally okay" in most congregations...the stupid little 'five-people-who-run-everything' crowd spoils everything else. They at least put a damper on the spiritual worship due to their political prowess they think they own in their little universe.

This case is no different....just bigger and more heinous. This abomination grew out of the exact same genesis of mentality as mentioned above.

Forget going to "church". There are no real churches out there any more. Stay home with your family and just read them the Bible and sing songs to each other. It's a LOT safer and it frees up loads of resources you've been wasting on organized crime.....er......religion.

"This case is no different....just bigger and more heinous."

Yep. I agree. There's a whole host of these serial preacher-predator cases. It's just that most of them don't end with a murder.