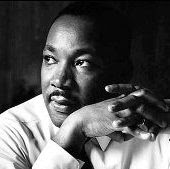 As I have struggled to bring to light the injustice in how clergy abuse survivors are treated in Baptistland, I have often pondered the words of King’s letter. I too have grown to the conclusion that the “moderates” may be the most frustrating of all.

Any fool will know that someone who denounces clergy molestation survivors as “evil-doers” isn’t going to be someone who will extend much help. Of course, that’s “any fool” except countless other Baptist leaders who remain content to keep a man of such hateful words in high leadership. Nevertheless, for us mere mortals, the heartless cruelty of Baptist men such as that -- and there are many of them -- is at least transparent. So we don’t get our hopes up.

In fact, the “moderates” maintain the same status-quo as the other Baptists.

In the words of Martin Luther King, moderate Baptist leaders “stand on the sideline” mouthing “pious irrelevancies and sanctimonious trivialities.”

(Anyone who doubts that “moderates” have a serious problem should consider the current case of Matt Baker who, despite multiple sex abuse allegations, church-hopped his way through the “moderate” Baptist General Convention of Texas and its affiliated entities.)

Thanks for such a thoughtful article. Those who can't seem to take action do indeed feel like dead weight in every denomination.
When there are practical, common sense actions needed to protect children, it seems like a corruption of any faith for people to do nothing other than talk and pray.
Many probably have no idea why they don't act. They may not feel they have a role to play in bringing about change. They do not trust their own wisdom, and let others dictate their priorities. Some are loathe to risk losing the comfort of belonging in their church and would never go it alone.
Playing it safe by defending the status quo gives witness to lukewarm Christianity.

So-called moderates in Southern Baptist life are still quite conservative by the standards of most other groups today. And the nature of conservatism is to "conserve", to keep things as they are. So it's not a surprise that a group as overall conservative (including the moderates) as the Southern Baptists would be reluctant and slow to change.

But the whole concept of repentance, which Baptists love to preach, is one of a change of our minds and actions to conform to God's will. In this regard, those who claim to adhere most strongly to the Bible as the source of their beliefs and practices (who use the term conservative to describe themselves), ought in reality be very "liberal" (in the sense of openness to change) when it comes to an area in which their lives and institutions are not in conformity with what the Bible clearly teaches. And it teaches us to help the helpless, to defend the defenseless, to protect the innocent, and to swiftly and surely punish the guilty.

Whenever we see these things not happening as God says they should, if we truly believe His Word, we should seek to change them. Sometimes being a "liberal" is the most Chistian and most biblical thing we can be.

Wonderful article!
To me moderates are the "lukewarm" Jesus spoke about They are sickening, divisive, and should be put out of any discusion where progress is a goal. They are anti-progress because it requires decision, action, and personal committment. It also means that you may have to work with people who have different views on other issues than you.
I have ome to the conclusion that the answere to "how do they?" is found in an religios education system that teaches self-glorifition first over sacrifice for others or a cause.
When they say "I agree with what you say not what you do.", call it for what it is, "A Lie"!

"But the whole concept of repentance, which Baptists love to preach, is one of a change...."

Interesting thought. How ironic that Southern Baptists are so extremely resistant to change -- even when change would promote the safety of kids and congregants -- and yet the very essence of "repentance" carries with it the call for change.

This is confessing my own ignorance, but until I attended this year’s MLK Day event at Tennessee State University, I was not aware of the pivotal role Nashville’s black Baptist community played in the sit-ins of 1960.

I wondered how Baptist Press treated the story, so I wasted a little bit of time to wade through three months of archives that the SBC History Library and Archives has put online.

Aside from one brief news story about a resolution passed by a fellowship of seminary students commenting on the “current situation,” I could find diddly squat. They were obsessed, meanwhile, with a Catholic running for president.

There was a series of articles about all the evangelistic and educational efforts being done by the various SBC agencies in cooperation with “negroes,” which I guess in their minds was supposed to be a big deal.

Thanks, Bob, for the fascinating historical insight.

Your mention of the SBC Library and Archives leads me to another point . . . I've always found it a bit incredible that the Southern Baptist Convention has no problem using Cooperative Program dollars to fund an archive of Baptist history, but screams "no way" at the notion of creating an archive/database for record-keeping on credibly-accused Baptist clergy.