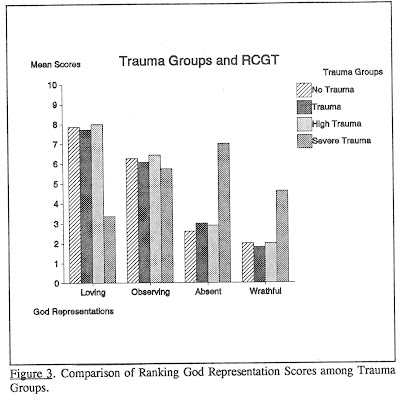 I’ve been looking at some of the earlier work of Carrie Doehring, a professor of pastoral counseling at the Iliff School of Theology. In her 1993 book, Internal Desecration, she explored the relationship between experiences of childhood and adolescent abuse, and the way women as adults consciously describe God.

The major finding of her work is that there is a strong correlation between severe childhood trauma and the way women perceive God in adulthood. Perceptions of God become significantly different when traumatization is severe. (p. 130)

Doehring’s research involved women who answered an extensive questionnaire in which they described experiences of sexual abuse, physical abuse, and witnessing domestic violence in childhood and adolescence -- i.e., before the age of 18. The degree of traumatization was scored based on such factors as the nature, frequency and impact of the abuse. The scoring system also included as a factor the surrounding support or lack of support for the victim.

The study quantitatively scaled the women’s childhood experiences into four categories: no trauma, trauma, high trauma, and severe trauma. Then it correlated those experiences with the women’s conscious descriptions of God.

Repeated abuse over a prolonged period of time is abuse characterized as resulting in severe trauma. (p. 131)

Doehring’s work is dense, but well-worth sharing. It is quantified academic research that confirms what many of us have experienced first-hand and know intuitively -- the abuse and its aftermath forever altered our relationship to God.

I’ve already shared with you the conclusion of Doehring’s work. Now let me share with you some excerpts from her analysis.

“This quantitative study demonstrates how the life event of repeated, prolonged abuse resulting in severe traumatization is inter-related with one’s projected God representations…. Prolonged, repeated abuse… may (1) distort internal representations of self, perpetrator, others and the anthropocentric God representations formed out of these; (2) create projections and interfere in relations with others and with God; (3) create systems of meaning that destroy faith, confirm hopelessness and despair, and enhance negative God representations, making it very difficult to have a relationship with a divine being.” (pp. 130-31)

“When traumatic stressors comprise a single event, then post-traumatic stress disorder may be described as simple . . . If those who are traumatized are able to draw upon internal resources (available in the personality which pre-existed the traumatic event), if they are at a developmental level that gives them the most resources, and if they are part of a supportive community then they may be able to actively work on feelings, thoughts, internal representations and sensations present in flashbacks and nightmares and other experiences when traumatization intrudes. In this way, the experience of traumatization is worked through, instead of dammed up and frozen.” (p. 111)

“It could be that when trauma is too severe, either with too many traumatic experiences or too many abusers, such a system collapses. In other words, such a means of coping is no longer available when traumatization exceeds a certain degree. . . . The women in this study, when traumatized and even highly traumatized, can preserve or remake their experience of God as loving. . . . When childhood violence becomes catastrophic, it is not possible for women to preserve a narrative of God as wholly loving.” (pp. 120-21)

“To identify God with the violence may undermine the very foundations of the self, and one’s basic sense of trust in the world, both at an individual level and a cultural level. . . . Such memories cannot be pieced together into a narrative of a loving, benevolent God.” (p. 121)

“The church’s silence on childhood abuse has meant that traumatization was compounded by the church’s neglect of those who were abused. When the church is silent, then it is more likely to be associated with the experience of an absent, condemning, distant and wrathful God. When the community of faith is silent, it stands with the perpetrator. . . .” (p. 138)

In Doehring’s research, the strong correlation between severe trauma and an altered God-perception held true regardless of who the abuser was. When the abuser is a member of the clergy -- i.e., someone for whom the connection to God is very direct in the child’s mind -- it must surely become even more likely that the person’s view of God will be reshaped.

Sorry Val... this isn't the right blog for evangelizing.

Thank goodness I am normal! Ha! Ha! I never thought of myself as normal for a long, long time and I always felt quite different than others because of the trauma I've been through but I believe my experiences shaped me into what I am today!
I love all of your information and if I ever get a moment to relax (ha-ha) I will look into purchasing the book you referred to in this post.

Oh my gosh, Christa! Your response to Val's sermonette was hilarious and to the point! You are my hero of the day! You go, girl!

Just want to thank you for your blog. I've learned a lot from it. I grew up in an Independent Baptist Church, so I do know how they think, operate, etc. So many familiar names on your blog from my childhood!!

I was never abused by anyone, but my problem was I was a very serious child and took all that I was taught VERY seriously-more seriously than my parents. Just another way that fundamentalism causes harm to children, who then wrestle with it all their whole adult life.

Thank you so much for speaking out and showing real compassion toward abuse victims by taking them and their hurt seriously.

I think people have been led to believe that applying the Bible to your life in the correct manner (theirs)is what's needed and fixes everything.

I didn't find the Bible to be sufficient for every problem Life is WAY more complex and complicated.