You said it, Ted. 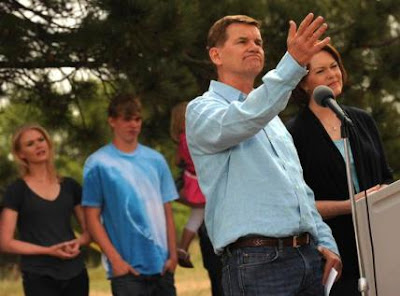 Ted Haggard is starting up a new church in Colorado Springs, and Haggard himself will be the pastor. Flanked by his wife and children, Haggard made this announcement yesterday at a well-staged press conference outside the family’s barn.

He rose to prominence as president of the National Association of Evangelicals and he was founding pastor of the 14,000 member New Life Church in Colorado Springs.

In 2006, Haggard was stripped of his pastorship after it was reported that a male prostitute claimed to have had a three-year cash-for-sex “relationship” with Haggard.

Later, we also learned that Haggard was reported to have had a sexual “relationship” with a 22-year-old male volunteer in his church. That was the story that really troubled me.

The media reported it as a “gay sex” scandal. But that’s where the media got it wrong.

And now Haggard will again be a pastor.

In announcing the opening of his new church, Haggard said it would be a place for “sinners and the broken.”

Haggard pointed out that he himself was a “broken” person, and he seems to even believe that the prior “scandal” is part of what now qualifies him as a pastor.

“It broke me. And I’m still broken. And I have an incredible heart for broken people. I think I’m qualified to hold their hands.”

“I’m the despised and rejected," explained Haggard. "I’m the one who there’s a reason not to trust."

You said it, Ted.

Though I haven’t seen much reason to believe you’re “despised,” you sure nailed it when you said that you’re someone “who there’s a reason not to trust.”

After all, you haven’t even yet acknowledged the reality of what you did to that 22-year-old in your church.

Oh sure… you confessed to an “inappropriate relationship,” but that’s just minimizing things for your own benefit.

It was abuse, Ted.

When you’re a pastor, that sort of conduct with a person in your church is not merely an “inappropriate relationship.” It’s abuse.

A pastor who has sexually abused a congregant should not again be a pastor. And a pastor who hasn’t even yet faced the reality of his abusive conduct shouldn’t even dream of stepping into a pulpit again.

Open your eyes, Ted. Take a long look at the full reality of what you did. It’s far uglier than you have yet acknowledged.

You were a pastor -- a person of power -- a religious authority figure -- a person in a position of spiritual trust. You used that position to exploit a young man in your church.

Have the decency to call it what it really was. It was abuse of another human being.

But at least you got this much right: You are indeed someone “who there’s a reason not to trust.”

I only hope the people in your new church will keep that truth firmly planted in their minds.

Posted by Christa Brown at 4:50 PM

But wait! This would mean Ted was lying all those years before when he claimed to be a new creature while he was anything but.

He is not above reproach to the outside. Why? Because he claimed to be saved before and an elder. And now he is claiming he is saved. Which is it?

As one who was sexually abused by a pastor at 23, I can sure attest that the power imbalance with pastor / congregant - particularly when the pastor is older - is so great that even though the person might be of age, it is still abuse! :-(

Over more than 40 years in Christian ministry, my spiritual "world-view" has been challenged and my faith tested by charlatans and predators masquerading as servants of God. I have yet to meet a mega church pastor, such as Mr. Haggard, who has not been motivated by financial greed and unbridled ego. For them, religion is a business, not a spiritual calling. They are salesmen at heart and are adept at marketing their "brand" to people hungry to believe in something and gullible enough to follow. He is already creating his "broken" brand, and no doubt hundreds, perhaps thousands will buy what he is selling. My advice to anyone foolish enough to come under the influence of any of the many "god merchants" like Mr. Haggard: remain seated at all times (unless you are preparing to run), keep your knees together, your gaze fixed on the preacher, with one hand on your wallet, and the other on the can of pepper spray in your pocket or purse.

Did you see Ted Haggard and his wife on Oprah on Thursday, June 3rd? While watching Ted explain that he checks in with his wife everytime he goes places, etc, I had no idea he had more than one same-sex relationship but he was very convincing on the Oprah Show that he had changed his ways; however, I didn't know he was starting another church but I may have missed the beginning of the interview.
Did you also know that his wife recently published a book called "Why I Stayed"? I'm not sure if I feel empathy, praise, or disappointment in her decision to stay! I think she is an amazing woman to forgive him and to try to understand her husband but I wonder if she felt pressured by the church to stay and try to work things through with Ted?

"Did you also know that his wife recently published a book called "Why I Stayed"?

This is part of the entire "brand management" Jim mentioned.

If the pew sitters only knew. See, Haggard is only using the skills and tactics he aquired growing the mega. The tactics and playbook are the same. Only he is introducing a new brand as Jim said. Jim gets it. I cannot tell you how many meetings I sat in where the words 'brand', DNA, profit center, etc were used. And it was a mega church upper management meeting I was in.

People need to understand this is all they know. They cannot operate in the world. They need their "ministry" bubble to live in. The money is great if you know how to play it.

I got saved when I left that "world".

On the "brand management" thing... Haggard is even using a major Hollywood public relations firm to help handle/promote his resurrected act as a pastor. Wonder how much he pays them?

Haggard, Young, Osteen...the list goes on and on, have reduced God to a commodity and have made Jesus little more than a good luck charm. They have learned that the American people are generally good and decent folks who want to believe in something bigger than themselves. That is a "field" ripe for picking, if one is driven by ego and has the skills of a good insurance salesman. After all, that is what they are doing...selling "fire insurance." Believe them, give them your money and you will someday live in a beautiful paradise. Don't believe them (of course they proof text to convince you "it's in the Bible") and you will "burn" in hell. All the while they are living large, flying in private jets and marketing their product on the Oprah show. What a great gig...and you don't even have to be bound by conscience or have an ethical bone in your body.

Why can't he (along with the rest of
these lazy-hypocrite "pastors") just
go and get REAL jobs (like everyone
else on the planet) and stop looking
for "flocks" from which to "fleece"?

Why are they so self-serving with
such a sense-of-entitlement that
they think they should receive pay
to "read and talk about” the Bible?

If he “loves Jesus” so much one
would think that he would stop
being such a hypocrite; admit to
everything; and just be so happy
to “read and share” the Bible
that he would do such for ‘free’
(including not even accepting the
so-called “love” offerings, LOL)

Life in “the real world” is too hard
for folks like this guy – so they have
to find ways to go back to creating a
”pasture” so they can “fleece the flock”.

He is the kind of person that Jesus, Himself,
warned people to beware & avoid at all cost.