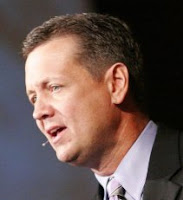 On September 14, Kentucky pastor Kevin Ezell was elected as president of the Southern Baptist Convention’s North American Mission Board. Ezell is pastor of the 6,000 member Highview Baptist Church in Louisville, Kentucky.

After a closed door meeting, trustees of the mission board announced Ezell’s election, and board chairperson Tim Dowdy praised Ezell as a man who “has demonstrated faithful leadership.”

So . . . let’s take a look at the sort of “leadership” Ezell demonstrated when confronted with a child molestation case.

As reported in the Louisville Courier-Journal, the case involved Bill Maggard Jr., who was a volunteer in the Sunday School and choir programs at Highview Baptist Church. Maggard had also worked as an employee of Highview Baptist School, which was operated by the church.

In 2004, Maggard was charged with molesting two boys while working at a Louisville elementary school prior to his work at Highview.

Prosecutors were seeking to investigate those charges and to obtain more information. For example, they wanted to find out “the circumstances under which Maggard’s employment ended” at the Highview Baptist School. The prosecutors had received reports that Maggard had been fired from Highview, but they hadn’t been able to confirm that information.

So . . . was pastor Kevin Ezell up-front and forthcoming about his knowledge concerning Highview’s former employee and Sunday School volunteer?

Did pastor Ezell beseech his congregants to take any and all information to the police so that they might conduct a thorough and complete investigation?

Did pastor Ezell preach to parents that they should talk to their children about it – including their adult children?

Did pastor Ezell use his “leadership” role to reach out to any others who may have been wounded?

No. . . not according to what was reported by the Louisville Courier-Journal.

When prosecutors subpoenaed pastor Ezell to testify before the grand jury, Ezell invoked the clergy-penitent privilege. In other words, Ezell claimed that he couldn’t be required to testify under oath (i.e., under penalty of perjury) because he claimed that, as pastor, he was entitled to keep secret whatever Bill Maggard had told him. (Do you think Ezell used offering plate dollars to pay the attorney who made that argument? I wonder.)

On that day, in Louisville, Kentucky, a judge accepted pastor Ezell’s argument, and so Ezell was able to avoid testifying about whatever he knew. (But note that Ezell's position is not universally accepted. Some other Kentucky judge might not have accepted it, and certainly, many judges in many other states would not accept an argument for secrecy about information concerning possible child molestation.)

In any event, prosecutors apparently didn’t get much help from pastor Ezell.

Furthermore, as reported in the Courier-Journal, “Ezell said he did not expect the church would announce Maggard's arrest to the congregation.”

No . . . pastor Kevin Ezell didn’t think any announcement to the congregation was needed.

Thank God for the press.

And thank God for a member of Ezell’s congregation who saw what was happening in her church and worried about the safety of the kids. As reported in the Courier-Journal, a member of Highview knew about prior allegations of abuse by Maggard, and she was concerned about his being in contact with children in the church. So, she contacted the victims and encouraged them to go to police. (Given that a member of the congregation knew about prior allegations against Maggard, you have to wonder why the church’s screening process was so ineffective that it didn’t find out about those allegations.)

Of course, that’s just the ones the prosecutors found out about and that were still within the limitations period and that were included in the plea bargain.

What a difference it might have made if pastor Ezell -- the pastor of the church where Maggard worked and volunteered -- had pro-actively reached out to try to find others who may have been victimized.

According to WLKY News, “the church has said it has no claims of abuse.”

See Baptist Planet's post "How did Ezell suffer the little children in 2004 case?"

At his sentencing hearing, Maggard used his proclaimed faith to make a classic plea for no prison time. After pleading guilty to sexually abusing seven boys, Maggard sought a sentence of probation only and argued that he was a changed man. He told the judge, "I faced my sin, sought forgiveness, sought help and God kept His promise."

As reported in the Louisville Courier-Journal, "more than two dozen people came to court to show their support" for Maggard, and "people from throughout the community had written the judge asking for leniency."

Posted by Christa Brown at 1:03 AM

That's my issue with the Tea Party. It's not that I'm not in sympathy with some of their issues also, it's just that I know they are no different from everybody else. You noted an example of how they operate. We've seen tons of examples. They are into power. They keep secrets. They care more about power and the cause of Christ and their church than they care about protecting children.

Plus they think they hear from God himself, and that's truly scary to me. Doing wrong, but saying God approves of you.

Also if the SBC is handing out pamphlets about protecting your children from sexual abuse, do they list this way of protecting them: have your pastor pledge to inform the congregation if he has any info on anybody that shows they have demonstrated they might harm children. That way the congregants won't be working in the dark.

Saying "watch out for snakes" is not as helpful as saying "actually there is one amongst us."

Also if a pastor does at least secretly have the person leave the church, isn't it easy for the bad guy to go to another church? He could just leave off his time at the former church if he thinks the pastor might out him if asked.

It seems like committees looking for new pastors, etc. should be extremely thorough in their investigations of an applicant.

What does the tea party have to do with this?

What secrecy of the tea party are you talking about that maps to Kevin Ezell?

"Doing wrong, but saying God approves of you."

This is the part that disturbs me the most too.

Clergy-perpetrators quite literally use Bible verses to convince their faith-filled young victims that it's "God's will."

Church leaders use "not hurting the cause of Christ" as justification for quietly letting perps move on.

Denominational leaders insist that their do-nothing response is biblically dictated by the doctrine of local church autonomy.

Every step of the way, and at every level, faith leaders twist faith into an excuse for doing wrong or doing nothing.

Anonymous,
You're right. I didn't state my thoughts very well. Nothing to do with the Tea Party.

Christa picked up on a couple sentences I wrote and responded to those. And I agree with her points.

The main point I'd like to make is that the abusers and those who let them get away with abusing-they all cite the Bible to show that God is in agreement with how they do things.

Anybody claiming to speak for God gives me the creeps these days. They are using the name of God to give themselves some kind of advantage or license. NOT ALL! But many, I should say.

And as far as the Tea Party, I think my thinking was that many of these SBC types are probably IN the Tea Party, and bringing their ways of thinking and ways of doing things with them. So, beware.

A couple of FEMALE teachers get caught, and wham bang their gone


but let a Male get caught and its
Allegations

I agree that it is not a political issue but a spiritual and moral issue. After all, liberals are into big brother and managing our lives from cradle to grave.

One has the power of the state behind it, and the other claims to have God's approval on it.