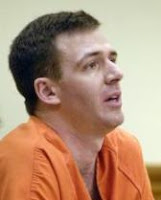 The victim said: "I’ve been unable to step in church or rely on faith because of how he used that as part of the abuse…. He would stop at nothing to get what he wanted…. I cannot even walk into a church without remembering all the ways Scott Hoppe used religion to fulfill his own sexual desires.”

The prosecutor said: He is "a wolf in sheep’s clothing." He is "everyone’s worst nightmare…. This is a man who has couched himself as a man of God… Inside, the real Scott Hoppe is very different. He’s evil, manipulative and egocentric."

The victim’s father said: "We teach our children to avoid strangers, to stay away from guys in trench coats that look like monsters. We don’t teach them to stay away from their pastors…. He’s slick. The damage that was done to our family is incomprehensible.”

The victim’s mom said: “I hope he feels remorse, but how would you know with someone who has so skillfully lied?"

The press said: “Scott Hoppe was hired to pray with teens. Instead, he preyed on them.”

The perpetrator’s wife said: "I believe in a God of grace and miracles…. I’m proud of the repentant and changing man he is now. I’m begging for mercy. So are our children."

The judge said: "It is clear he took advantage of his position of pastor and took advantage of a child who was learning her sexuality at the time. This is always tragic. People do things to young people. It just takes something from them and violates their sense of trust. When you do this, you obviously wreak havoc on the life of the victim."

Scott Hoppe was a pastor at Grace Church in Burlington, Wisconsin. On Monday, he was sentenced to four years in prison and six of extended supervision for the sexual abuse of a teen girl.

The church's head pastor was educated at a Baptist college and a Baptist seminary. That, along with the church's online statement of belief, makes it appear to be a Baptist church.

Read more and leave comments:
The Journal Times, Racine, Wisconsin (This has video of speeches at the sentencing hearing, including speeches from the victim’s family, the prosecution, and Hoppe himself. It also has a place where you can leave comments at the end of the article.)

Posted by Christa Brown at 8:36 AM