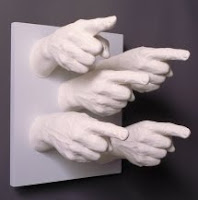 Whenever I see Baptists point their fingers at Catholics for clergy sex abuse, I want to hold up a mirror.

But lately, I can’t seem to find enough mirrors.

The scandal in Germany is what prompted the latest finger-pointing. As reported in the German news magazine Der Spiegel:

“The Catholic Church in Germany has been shaken in recent days. . . . Close to 100 priests and members of the laity have been suspected of abuse . . . After years of suppression, the wall of silence appears to be crumbling. . . . Now they are finally revealing their own figures, though hesitantly. According to a Spiegel survey of Germany’s 27 dioceses conducted last week, at least 94 priests and member of the laity in Germany are suspected or have been suspected of abusing countless children and adolescents since 1995. A total of 24 of the 27 dioceses responded to Spiegel’s questions.”

On the one hand, Baptist leaders point their fingers at the bishops for what they did wrong, but on the other hand, they justify Baptists’ do-nothingness on the ground that “we have no bishops.”

They criticize the bishops for what they didn’t do, but then they use Baptists’ lack of bishops to deflect even the possibility of action in Baptistland.

And make sure to notice . . . Der Spiegel got its numbers by delving into records kept by the dioceses themselves. The dioceses revealed “their own figures.”

Meanwhile, Baptist leaders refuse to even bother with keeping records on Baptist clergy.

For Baptists, “it’s our religion” means Baptist leaders don’t keep any records at all on their clergy. They claim that Baptist belief in local church autonomy precludes denominational record-keeping.

When a German magazine publicizes church records of 94 priests and laity who are “suspected” of abuse, Baptists point their fingers. Meanwhile, in Baptistland, there exists not even the possibility of any records on “suspected” abuse, because Baptist leaders flat-out refuse to assess credible accusations much less to keep track of them.

Rather than talking about the 94 in Germany, why aren’t Baptists yelling their lungs out about all these Baptist cases?

And mind you, most of the Baptist cases that get reported involve much more than “suspicion” or “credible accusations.” With Baptists, reporters can usually write only about cases involving probable cause for arrest, criminal charges, grand jury indictments, or criminal convictions. Without church records, there’s little way for reporters to write about the sorts of “credible accusation” cases that they can with Catholics.

Can you imagine what it would be like in Baptistland if we started seeing, not only the news about criminal charges and criminal convictions, but also news about internal complaints and denominational review proceedings? The number of cases coming into public attention would skyrocket.

But of course, that’s not the way it is in Baptistland. Baptists haven’t even yet started keeping records on clergy abuse reports. They’re decades behind.

Here’s the Catholic pattern: keep it quiet, cover it up, transfer the accused cleric to another church, and keep an in-house record.

Here’s the Baptist pattern: keep it quiet, cover it up, allow the accused minister to move to another church, and keep NO record. Is this better?

And when keep-it-quiet men like Steve Gaines and Tom Messer are promoted at Baptist conferences as examples of pastoral leadership, why don’t other Baptist pastors decry it?

And when Baptists’ highest leader fosters a culture of victim-blaming by publicly smearing those who bring abuse to light as “opportunists,” why don’t we hear hundreds of other Baptist voices shouting “No!”

And when we learn that, despite multiple abuse and assault reports, a Baptist pastor was able to advance through nearly a dozen churches and organizations affiliated with the Baptist General Convention of Texas -- until he committed murder and was stopped only for that reason -- why aren’t all good Baptists screaming “Ya Basta!”

So much collusion. So much complicity. So much do-nothingness. All right here in Baptistland.

Posted by Christa Brown at 8:29 PM