Haiti: Mission team's adviser "may be wanted for human trafficking" 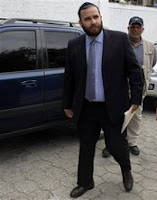 A man who provided legal assistance to the 10 jailed Baptist “missionaries” in Haiti “may be wanted for human trafficking in El Salvador.”

The deputy investigations director of El Salvador’s police, Howard Cotto, told reporters that “the possibility is high” that the missionaries’ adviser, Jorge Puello, is the same man who is “named in an Interpol arrest warrant for allegedly running a sex trafficking ring that lured women and girls from the Caribbean and Central America into prostitution with bogus offers of modeling jobs.” (That’s Puello in the photo.)

Furthermore, the police chief for the Dominican Republic told reporters that, while Puello has no criminal record there, he was under investigation. And the vice-president of the Dominican Lawyers Association said Puello was in apparent violation of the country’s requirement for having a license.

Puello has been quoted as denying any connection to trafficking.

According to the Associated Press report, Puello contacted the missionaries’ church, Central Valley Baptist in Meridian, Idaho, after the missionaries were arrested on January 29 for trying to take 33 children out of Haiti without documentation. Church members failed to check his background before working with him. They just assumed good intentions.

This story just goes from bad to worse, doesn’t it?

Then, when Haitian authorities arrested the team as it attempted to take undocumented children across the border, Central Valley church pastor Clint Henry described the Haitian government’s action as “accusations of Satan.”

It wasn’t a good start. Rather than honestly addressing the team’s own failures and dealing with them, Pastor Henry cast Satanic blame onto the Haitians.

The mission team was headed by a woman, Laura Silsby, who probably should not have been appointed as a leader for much of anything, much less for a project directed toward the “rescue” of children. Reportedly, Silsby was “plagued by financial and business problems” and had told people that she was leaving the country.

Nevertheless, Southern Baptists’ top-dog ethicist Richard Land blustered and bragged about how “churches are giving hundreds of thousands of dollars to relief efforts for the people of Haiti,” and then ranted that it was “outrageous” for the Haitian government to respond in this way to the “obvious good intentions of these honorable Christians.”

Meanwhile, other high Southern Baptist officials expressed concern for how the arrests might hurt the Baptist image.

And now, we learn that the adviser for the arrested missionaries “may be wanted for human trafficking in El Salvador.”

It’s bad enough that nobody in Baptistland appears to have done any due diligence on whether Laura Silsby should head up a mission team. But it’s even worse that nobody in Baptistland appeared to learn any lesson from that mistake. They accepted the services of an adviser “to help” the arrested missionaries, and they “failed to check his background.”

Lo and behold, look at the questions that are now raised about their adviser -- questions that should have been raised on the front end instead of the tail end.

Given the missionaries’ naivety and the Baptists’ blind-eyed system, Jeri Massi got it right from the get-go when she pointed out that “criminals would have found them easy marks to use to round up children.” Now we are left to wonder whether Jeri’s words may prove true in actuality rather than merely in theory.

Despite the rantings of Richard Land about “obvious good intentions,” the Haitian authorities are the ones who got it right when they said that, at the border, there was “no way to be sure” that the people in the bus had the children’s best interests at heart.

Personally, I believe that at least 9 of those people on the mission team probably did indeed have good intentions, and I hope the Haitian judge will move forward with a decision to provisionally release them. However, my personal belief is irrelevant. So too is Richard Land’s.

The Haitian authorities had every right -- and every good reason -- to detain the Baptist mission team for investigation.

As reported on BaptistPlanet, “The 10 still-jailed Baptists in Haiti were warned (repeatedly)”.

Posted by Christa Brown at 6:58 PM

When you are use to having your way and not being rsponsible for the actions of others, why would you not belive you can just load up a bunch of children and take them to another country?
Too may pastors see themselves as the authority on any subject involving a church. From building codes to electrical work to the law they believe that they know what is best and all good church members should yield to their authority.
It seems that finding a good "Pastor" is hard to do now days. They desire to be administrators instead of the "feeder of sheep"!

I'm not so sure **nine** members of the team had good intentions. Charisa Coulter has been joined at the hip to Laura Silsby, following her with unswerving (and weird) loyalty through the entire ordeal. Ms Coulter is allegedly Silbsy's nanny. Silsby has a five year old daughter at home. So why is Coulter with Silsby?

It's entirely possible that Coulter is thoroughly duped and has been for years, but her intense loyalty, if it includes a willingness to insist that Laura Silsby is right no matter what she does, while pathetic, is also criminal when it includes crossing a border with a busload of children, some of whom are dehydrated and ill.

Why am I not surprised? The more this story is exposed, the more it smells of something rotten. I am inclined to agree with Jerri, I don't believe "'nine' members of the team had good intentions." Perhaps, eight.

Thanks for the update, Jeri. I'm glad for the eight.

Here's a link to the Associated Press article about 8 of the 10 being freed.