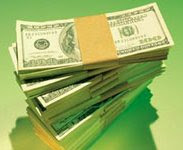 So . . . twelve billion dollars a year get deposited into Southern Baptist coffers, but not one denominational dime gets designated for ridding the ranks of Baptist preacher-predators.

Twelve billion dollars a year flow into the largest Protestant denomination, but the denomination can’t allocate a single dime to give Baptist kids the same sorts of institutional safeguards as kids in other faith groups get.

More on where the $12 billion goes:

“Churches on average gave about 6 percent of those funds to 42 state and regional Baptist conventions. . . . 2 percent of the total received by churches is forwarded to national ministries of the Southern Baptist Convention, which allocates funds to various denominational entities. The largest, the International Mission Board, gets 50 cents of every dollar received at the national level. Between 22 and 23 cents go to the North American Mission Board, and a roughly equal amount is divided among the six SBC seminaries."

“Smaller percentages are allocated to the Ethics & Religious Liberty Commission, which receives 1.65 percent of the Cooperative Program pie, and the Southern Baptist Historical Library and Archives, which gets one quarter of 1 percent. The Executive Committee receives 3.4 percent of the budget, to be used for facilitating ministries like planning the SBC annual meeting and conducting day-to-day business on the convention's behalf.”

If an autonomous church in Kansas can send its dollars to fund a seminary in Kentucky for the purpose of educating future Southern Baptist pastors, why can’t that same autonomous church send its dollars to fund a professionally-staffed denominational review board to assess complaints about Southern Baptist pastors and to inform people in the pews?

And what about those dollars that go to the Ethics & Religious Liberty Commission? It’s headed by Richard Land and has offices in Washington D.C. and Nashville. Land purports to represent Baptist concerns on public policy issues “in the halls of Congress, before U.S. presidents, and in the media.”

But what do you imagine most parents in the pews care about more . . . Richard Land’s career in the public limelight or the protection of their kids against church-hopping clergy predators?

Keep in mind that this is the same Richard Land who, a few years back, had the almighty hubris to publicly suggest that Southern Baptists didn’t have the sort of clergy sex abuse problem Catholics had because Baptists had really worked “to focus on this” after just “a couple” cases.

Just “a couple” cases! That’s the sort of non-leader leadership that Baptists are sending their dollars to support. Don’t you think most people would prefer to get objective information from a professionally-staffed review board rather than distorted PR spin from a man like Land?

Then there’s that 3.4 percent of the national dollars that go toward funding the Executive Committee -- a group that systematically keeps people in the dark about the salaries and compensation packages of their top officials and staff. So, while the Executive Committee is happy to accept the hard-earned dollars of people who sit in Baptist church pews, it won’t tell people in the pews how many of those dollars are being paid to whom.

Do you think people in the pews would prefer to have their dollars go toward funding the salaries of executives who reject even the basic transparency of disclosing how much they’re getting, or would they prefer to fund a review board that could provide all Baptist churches with the resource of objective information about ministers who are credibly accused of abusing the young?

Keep in mind that this is the same Executive Committee that didn’t budget a single dime for doing even so little as a study on the clergy abuse problem, even after 8600 messengers to the Southern Baptist annual meeting directed them to. This shows you how little respect the honchos of the Executive Committee actually have for the Baptist polity they profess. They claim the Southern Baptist Convention is a bottom-up organization; yet when the bottom issues instruction to the top, the top doesn’t bother if it doesn’t want to.

And when it comes to clergy sex abuse, the top doesn't want to do diddly-squat.

But it isn't because they don’t have the money. This is a tentacular organization that takes in more than $12 billion dollars per year.

That’s just annual revenues -- oops, I mean offerings. Let’s not forget that the Southern Baptist Corporation -- oops, I mean Convention -- also has multi-millions (and some calculate more than a billion) in assets.

Don't you think matters are even worse in charismatic churches?

To make matters worse SBC leaders are trying to cram a false doctrine of tithing down the throats of independent churches.

Even worse, they will think that this money means God's Blessing is upon them.

"Don't you think matters are even worse in charismatic churches?"

Welcome to the blog, Russell. I don't have any reason to think matters are any worse in charismatic churches, but I sure don't think things are any better either. In his 2003 book, Philip Jenkins, professor of religious studies at Penn State, pointed out that "Some of the worst cases of persistent serial abuse by clergy have involved Baptist or Pentecostal ministers. . . " (The New Anti-Catholicism at p. 142) So, I suspect that BOTH Baptists and charismatics have a similarly terrible track record on this.

Although I know that there are a lot of abuse stories from individual churches which are autonomous, I do not have a large amount of financial abuse storeies from Baptist leaders. My focus is on doctrinal tithing abuse.

"I do not have a large amount of financial abuse stories from financial leaders."

I think the root of the problem for financial exploitation is similar to the problem of clergy sex abuse -- both are wrongs that flourish when there is a systemic lack of accountability and lack of oversight.

Thanks for the links. With your permission I would like to post links to your site on my site. Amazing that Les Puryear apologized. Did he also apologize for trying to get Andreas Kostenberger and David Croteau fired last month?

Russell,
Sure - no problem. As for Les Puryear, I don't know how that story ended. But here's a link to "Watchdog's" blog, talking about it. You might want to also check out his 2/26, 2/24, and 2/15 postings, which talk about tithing teachings in the SBC and also pastoral extravagance.

I think that I had a vital part in that fiasco.

Christa,
This is a masterpiece for explaing how SBC money is used and abused. I thimk it should be a regular post on your blog as it so cearly explains the SBC money trail in the mainline.
Very Good Job!