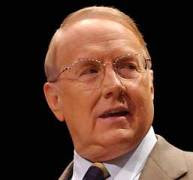 James Dobson has given new meaning to the term bully pulpit.

On the occasion of his exit from Focus on the Family, let it be noted that the child psychologist built an evangelical empire on families' vulnerabilities. He launched his career urging parents to keep their kids in line by hitting them.

Published in 1970 as a challenge to the liberal child-rearing techniques popularized by Benjamin Spock, Dobson's first book, "Dare to Discipline," advocates forcefully combating rebelliousness. To illustrate his point about asserting his God-given authority over his family, he tells the story of disciplining his miniature dachshund, Sigmund Freud, with a belt. He encourages not only spanking kids, but also leaving belts around the house to remind them of the consequences of defiance.

"Corporal punishment, when used lovingly and properly, is beneficial to a child because it is in harmony with nature itself," a Focus on the Family website advised.

There are debates to be had over ways to discipline children. "Spare the rod, spoil the child," goes the biblical saying that Dobson has exploited in presenting a Christian approach to raising kids.

Every parent has yelled too loud or squeezed too hard. Every mom and dad knows the temptation to haul off in rage.

That impulse may be natural. But acting on it plays on our weaknesses. And celebrating it — as Dobson has, albeit lovingly and in harmony with nature — borders on sick.

"We're civilized and we try to control our natural impulses. That's what sets us apart from the apes," adds psychologist Kate McGoldrick. "Coercive violence isn't the method to have a lasting relationship with your kid. Connection and boundaries aren't mutually exclusive."

Dobson founded Focus on the Family in 1977. He made a name for the nonprofit and for himself by providing advice on marriage and parenting. He avoided partisan politics until, he said, he was inspired by a 2003 court decision removing the Ten Commandments from an Alabama courthouse.

He since has thrust himself into the debate over whether to eliminate the use of filibusters to block judicial nominees in the U.S. Senate. He objected to SpongeBob SquarePants as a symbol of a hidden homosexual agenda. And he made headlines for comparing embryonic stem-cell research with Nazi experiments.

His fear-mongering reached new heights in 2008 when, inspired apparently by a Twitter from God, he warned that an Obama presidency would result in catastrophes ranging from "terrorist attacks across America" to the end of Boy Scouts and talk radio.

He delivered his last Focus on the Family broadcast Friday when he officially left the group, citing its need for new leadership. . . .

Focus' outspoken founder had a vast and loyal following. . . . Still, I hate to think about all the kids who've been smacked around because the good doctor gave their parents permission to do so.

Another Jezebel: Read about the invectives hurled at Susan Greene after this column was published. Whatever you may think of the belt-based, Bible-rationalized sort of corporal punishment promoted by Dobson, you've still got to wonder how so many self-described "Christians" can hurl so much hateful name-calling and vitriol. It's something I wonder about all the time since I myself have been called a "Jezebel" a bit too often.

I guess Susan and I say also her critics they must never heard the episode of Focus on the Family where the dad was going to let the wife spank him instead of spanking his child for something the child did. The apostle John is reported to have done a similar thing with a disciple of his.

There's been a lengthy discussion over on the forum at http://nolongerquivering.com/ on the Pearls and the Liberian girl who was beaten to death using the 1/4 in plumbing supply line he recommends for beating your kids into godliness.
The discussion would be at http://nolongerquivering.proboards.com/index.cgi?action=display&board=lydia&thread=741&page=1

It's really shocking how far some folks will go to break their childs spirit 'for the lord'. And Michael Pearl and his wife are laughing about the brouhaha this has caused because, by god, they know they're right, eh? Michael response to the critics is here http://pearlchildtraining.blogspot.com/2010/03/michael-pearl-laughs-at-critics.html
JEB

JEB: Thanks for the links. Very sad stuff. And the fact that it's all justified in the name of religion just makes it all the worse.

I will never understand how so many self-described Christian people can spew so much venom and vitriol. Be sure to read some of the sick stuff that was sent to Susan Greene after she dared to take issue with Dobson's belt-driven style of corporal punishment. I get this kind of ugly stuff all the time, and I'm always a bit amazed. I guess if someone thinks they've got God on their side, then they don't worry themselves with bare civility.

I totally agree that Dobson is wrong on this.

Dobson is more right on this topic than not, and Susan's artcile mischaracterizes his teachings. But Christians are wrong to respond to Susan's statements with hatred.

Dobson is more right on this topic than not, and Susan's artcile mischaracterizes his teachings. But Christians are wrong to respond to Susan's statements with hatred.

For all those Dobson defenders out there, you need to research what he has said in his books, like:
Page 68 Spank children if their bedwetting is an "act of defiance."
Page 70 If a child cries more than a few minutes after being spanked, hit them more.

I horribly mystified...Dobson never never has had advocated beating a child. Those criticizing Susan are should not be associated with Dobson either.

Still horribly mystified...those quotes are ripped to shreds and taken out of context...he is talking about an aversion on the hiney rather than child burning himself or falling off something. Dobson would scorn parents for having anger when disciplining. You have to be broken hearted not incensed and you have to model because much more is caught more than taught.

Sorry guys but my dear sweet Jesus loving mom belted us as teens. Not often. Before that it was a switch. Ouch! And it was for the really big stuff, too.

And she hated doing it. It was never done in anger but it worked. I am thankful she did.

To compare that to what the Pearl's teach and to what happened to that poor child is to be ignorant of truth.

And I am not a fan of Dobson but not for the spanking reason. He is right on, there.

"...those quotes are ripped to shreds and taken out of context.."


If what you say is true , then the book should be recalled like this one

and re-edited to put proper warnings in it,