"Worse to have a woman" redux 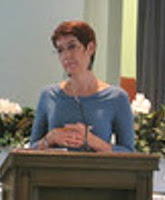 Once again, the Georgia Baptist Convention stands ready to disfellowship a church for having a woman pastor.

On March 16, the convention’s executive committee voted to recommend the ouster of Druid Hills Baptist Church in Atlanta. It’s a historical church for a lot of reasons, but all of its long Southern Baptist history flies out the window when a woman steps into the pulpit.

Reverend Mimi Walker doesn’t even carry the title of “Senior Pastor.” She’s a “co-pastor” and carries the title jointly with her husband, Reverend Graham Walker.

But that’s still too much. The Southern Baptist honchos can’t restrain themselves. They smack down the supposedly autonomous church because of its dreadful sin of having a woman as “co-pastor.”

In the very first comment under the ABP article, a person pointed out the hypocrisy:

“The SBC can dictate who an autonomous church can call as pastor, but cannot maintain a list of pastors/staff who are predators. Go figure.”

That pretty well sums up the reality of Baptistland, doesn’t it?

Southern Baptist officials care more about preserving their image of male-dominant creedal purity than about protecting kids against the reality of church-hopping clergy predators.

Here’s a reminder of how that reality actually works in Baptistland. It’s worse to have a woman than . . .

But oh gee whiz . . . let a church put a co-pastor woman in the pulpit and a shout goes up from the Baptist hordes: “Oust them!”

"Southern Baptist autonomy (not for women in the pulpit, for predators)," Baptist Planet, 3/19/2010

Could a Southern Baptist Church be disfellowshipped for knowlingly passing along a clerical sexual predator to another congregation without so much as a word of warning? Or is BF&M 2000 somehow too silent for application to the protection of children and underage adolescents from rape and molestation?

In Search of the Whole-Hearted Life [Bonnie Jaeckle] > SPIRITUALITY - WHAT'S WITH PAUL & WOMEN?.

"The book you hold in your hands is comparable to an antidote for a venomous snake bite. The viper known as 'the doctrine of male authority' has bitten the church. The toxin emitted by this errant teaching affects the Females within our assemblies. It debilitates their God-given gifts, denigrates their Spirit-led ministry, and downplays their role as New Covenant priests. Those of us who have seen the church bitten need assistance,and help has arrived. This book will help you suck out the venom of male only authority within the church . . . .”

- excerpt from the Foreword by Wade Burleson, pastor of Emmanuel Baptist Church in Enid, Oklahoma.