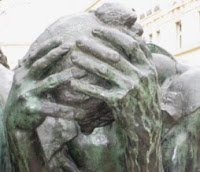 “My faith is hanging by a thread. There is just so much hate to deal with.”

That’s what John Doe wrote in his comment to Cheryl.

When I saw his words, I wanted to weep.

If I could get only one wish granted for Baptist clergy abuse survivors, it would be that they might be spared the hell of what comes afterwards -- the hell of “so much hate.” It's where so much greater harm is done.

When most people think of clergy child molestation, they focus on the evil of what the perpetrators do. This is true of many survivors as well.

In fact, when survivors reach the point of being able to talk about it, they often begin their journey by telling themselves something like this: “How bad can it be? No one can possibly do anything worse to me than what’s already been done.”

Somewhere along the road, they realize they were wrong. The abuse itself was only the first level of hell. There are other, deeper levels of hell for survivors who persist in trying to report clergy abuse.

Plenty of people in Baptistland make sure of that.

For starters, there’s the hell of the many who do nothing. It’s the hell populated by the masses who, when it hits close to home, deny and minimize the horror of abuse, and act as though it’s no big deal. “Why can’t you just get over it?” they ask. “Besides, look at all the good Brother Bill has done” . . . as if pastors could use hospital visits to buy dispensation for child molestation.

Then there’s the hell of the pseudo-pious who pontificate on forgiveness, and all the while, heap still more blame and shame on the survivors. With those pastoral voices they learned at seminary, they sermonize on reconciliation . . . but all the while they conveniently forget that reconciliation begins with truth.

The levels of hell go still deeper. There’s the hell of all the double-faced duplicity. It’s the level populated by denominational leaders who, from one side of their mouth, talk of how much they care, while from the other side, they instruct their lawyer to go “help” the church . . . knowing full-well that his “help” will work toward silencing the victim while leaving the perpetrator in his pulpit.

Then there are the even lower levels of hell with all the Baptist church and denominational leaders who deliver name-calling, bullying, intimidation, and threats. Most ordinary people would not believe the levels of meanness to which religious leaders will stoop. Until just a few years ago, I myself would not have believed it. I was incapable of believing in so much hate.

But now I’ve seen that hate. And Baptistland is where I saw it. John Doe has seen that hate too, and so have many, many more Baptist abuse survivors.

“So much hate.” It’s a horrible thing to have to see. . . even more horrible than the pictures in our heads of our bodies being sexually abused.

In Baptistland, clergy abuse survivors get to see all the ways that humans have of inflicting hate in the name of religion.

“So much hate.” It’s a horrible thing to have to see . . . and it's a hate that's not just about the perpetrators. It’s about all the rest of what happens in Baptistland.

Posted by Christa Brown at 7:47 PM

"Baptist clergy have lost contact with WHO they worship. It is not God. If it is not God, then is it money? Is it Ego? Is it Power? Is it all the above?"

Tears rushed to my eyes as I read John Doe's comment as well. As John Doe questioned above, "who do they worship?" I never really thought of that before. In all that has happened to me in the Baptist church over the past 4 years...I completely lost sight of the fact that these men...these deacons and pastors are supposed to be leading, teaching AND worshipping. I have struggled so long to to try to keep my and my children's focus right. How many times have I said to myself and to my kids..."we are here to worship God...we have to just keep our heads up and look beyond what people are doing. We are here to learn about God and serve Him." And oh how we tried and tried.

I guess it was beyond me to wonder who were these men worshipping? Yes, they sure did keep my focus off of that. I was trying too hard to to survive in the hostile environment they created...having them look me in the eyes and say "we just care about you...we're just trying to help you do right...in the multitude of counselors there is wisdom...let us help you...submit to us for we watch for your soul". I would tell them "God knows the details and He is the watcher of my soul...I just want to worship and serve Him here and have my kids do the same."

WHAM...the message of "we just want help" quickly changed. The message then was "well, at the very least, you are insubordinate and God will not bless that...at worst, you are hiding some sin...we cannot have sin in our church or school or youth group and the way of the sinner is hard so expect your way to be hard."

Why? Why? Why would anyone do this? I have no answers. The most devastating thing to see is the blank looks in the eyes of family members and friends when you try to tell them what has happened. You manage to stammer it out and then you get "but why would they do that? It doesn't make sense. They wouldn't just do that to you for no reason." Then heads start to shake...the shoulders shrug...and almost always it is followed by "well, we haven't had any problems so..." It trails off there every single time.

John Doe's question of "who do they worship?" I don't know.

Why do they do this? I don't know. I just don't know. And yes, our faith hangs on by a thread...keep hanging on John...don't let go. God has never and will never let go of us. He won't.

This very Bible verse (along with many others) was repeatedly used against me. Hebrews 13:17 - "Obey them that have the rule over you, and submit yourselves, for they watch over your souls." When people are raised from day one to believe that church leaders watch over their soul, how should they suddenly know that it's all false? Obviously, I know the falsity of it now . . . but I was incapable of perceiving it then.

And that "God will not bless" line? A whole heap of us have had that one flung in our face. As if THEY knew God's mind and held the certain knowledge of what God would and would not bless.

But of course, it's no wonder we hear it so often. It's probably what they teach in seminary. After all, the president of Southwestern Baptist Theological Seminary, Paige Patterson, even told Debbie Vasquez that God "will not bless" her if she persists in hanging out with those "evil-doers" who are trying to expose clergy abuse. Meanwhile, Debbie's perpetrator still stands in his pulpit. And Paige Patterson? He's a guy who, as reported in the Dallas Morning News, turned his back on dozens of abuse reports against Baptist minister Darrell Gilyard. Gilyard went on to accumulate more and more abuse reports, and ultimately, after he was allowed to move on to a church in Florida, he was finally convicted on child sex charges there. But oh gee whiz . . . the mighty Paige Patterson says "God will not bless" those who have anything to do with the people trying to expose this stuff . . . as if Patterson knew.

I think that they preach so much untruth about forgiveness that they have convinced themselves that no matter what they do God will forgive them. And, after all, God knew they had this problem before He called them so He must understand and will take care of everyone involved.
It is twisted and hellish but they are convinced that they are doing nothing God does not already know about. So, if God understands, why doesn't everyone else?

Hate. That and power are the only things they know. And they call it religion.