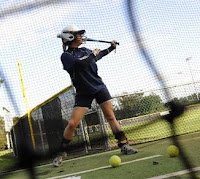 A women’s softball team wanted to get in more games. So they registered and paid their fee to compete in the Bellevue Baptist Church league. Bellevue banned them.

Andy Beal, the church’s “sports outreach” minister “had received information” that the team’s coach was gay. So he contacted her for a meeting and inquired about it. The coach, Jana Jacobson, “acknowledged she is gay.”

“The team’s participation would send a message to Bellevue members that the church condoned her lifestyle.” That’s what Jacobsen was reportedly told.

About 10 days ago, when I first saw this story, I thought, “What nincompoops.” But it didn’t seem worthy of comment. After all, if I wrote a blog posting every time some Baptist minister did something nonsensical, hypocritical, and hateful, I’d never even manage to get the laundry done.

So, despite the obvious fodder for “love thy neighbor” sarcasm, I let it go.

Then I saw this more recent article with the remarks of Bellevue’s senior pastor, Steve Gaines . . . and I just couldn’t bite my tongue any longer.

The senior pastor of this Memphis megachurch justified the decision to ban the coach’s softball team by saying that those in leadership positions influence others. He told Bellevue church members that the disqualification of the softball team would have been handled differently if it had involved something in the coach’s past. But “you’re engaged in it right now,” sermonized Gaines.

To appreciate the full effect of Gaines’ remarks, you have to put them in context with Gaines’ own conduct. So let me bring you up to speed. Gaines is a Southern Baptist pastor who turned a blind eye and kept quiet when one of his staff ministers, Paul Williams, admitted to having repeatedly molested an adolescent boy. But minister Williams claimed it was in the past. So pastor Gaines did nothing.

In fact, worse than doing nothing, Gaines kept Williams in a position of trust and leadership as a minister in the church. He even allowed Williams to serve as a counselor to people who said they had been molested as children.

Did you get that? Gaines allowed one of his staff ministers, who was an admitted pedophile, to sit in his church office and use his ministerial position to listen to the most personal and painful stories of people molested as children. Pretty sick stuff, eh?

But senior pastor Steve Gaines apparently figured it was okay since minister Williams said his conduct was in the past. So Gaines kept it quiet and kept the admitted child molester on his ministerial staff.

All of this is public information. Gaines’ conduct came to light two-and-a-half years ago.

But despite Gaines’ keep-it-quiet response to a clergy child molester, Bellevue Baptist still retains Gaines in a leadership position. This is continuing conduct by the church itself -- conduct that they’re “engaged in right now.”

By retaining Steve Gaines, Bellevue Baptist sends a constant message that, in fact, it is no big deal for a pastor to keep quiet about a minister’s sexual abuse of a kid.

In many other organizations, a failure and cover-up as reckless and contrived as that of Steve Gaines would carry the consequence of a required resignation. New leadership would be demanded. But not at the Baptist megachurch of Bellevue. And not when the leader is a purported anointed one.

A pastor’s cover-up of clergy child molestation should require serious consequences, but the leadership lesson of Bellevue is that it doesn’t.

That’s the style of leadership that pastor Steve Gaines has demonstrated.

It’s bad enough that Bellevue would purport to stake moral high ground with its petty ouster of a women’s softball team.

Posted by Christa Brown at 7:13 AM

Scotty Shows made a wise choice regarding separating from sin. There is nothing "nonsensical, hypocritical, and hateful" about Bellevue's decision to ban a homosexual coach from this league. Bellevue's decision gives the Christian players spiritual protection from the evil sin of homosexuality.

I pray Jana Jacobson gets right with Jesus.

"Gaines is a Southern Baptist pastor who turned a blind eye and kept quiet when one of his staff ministers, Paul Williams, admitted to having repeatedly molested an adolescent boy"

Well I am glad you posted this. I read this story a few days ago and thought "what a bunch of idiots" and made some comments to my wife, "Isn't it interesting that they track this women down and interrogate her on a rumor about her sex life, but I am pretty sure they are not interrogating OTHER church people based on rumors they have heard.

I didn't imagine it would be as bad and as hypocritical and sick as you revealed here.

I would sure feel safer with my kids around a lesbian coach than around a convicted pedophile. It's truly amazing that there are people out there who thing the other way around about this. Wow!

If you are a true follower of Jesus Christ, you shouldn't want your children around a pedophile OR homosexuality.

Isn't it strange how so many so-called Christians, and especially Baptists, seem so much more concerned about a person who acknowledges homosexuality than they do about clergy-child-molesters who actually hurt kids? The problem for Baptists is that many homosexual people are actually authentic and honest about themselves. Clergy child molesters (and those who cover-up for them) are almost never authentic and honest about themselves. But by being secretive, they make it so much easier for everyone else in Baptistland to simply turn a blind eye.