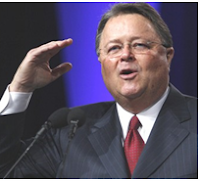 “Cooperation is foundational in everything we do jointly as believers,” he said.

Yeah, right. Everything except protecting kids and ridding the ranks of clergy predators. That’s what Chapman should have said.

After all, it’s pretty much what he’s said in the past.

Morris Chapman is the same guy who said the reason the denomination could not create a database of admitted, convicted and credibly-accused clergy sex abusers was because of Baptists’ “belief in the autonomy of each local church.”

Morris Chapman is the same guy whose Executive Committee put out a 2008 report claiming that the Southern Baptist Convention cannot “bar known perpetrators from ministry or start an office to field abuse claims.”

Morris Chapman is the same guy who, from one side of his mouth, said Baptists must “do everything within our power” to stop clergy sex abuse, but from the other side of his mouth professed that this multi-million dollar denomination is powerless -- we have “no authority” he said.

Now, in the face of all those past remarks, look at what he has to say when money is at stake.

At the luncheon, he was urging that a higher percentage of Baptists’ $500 million in annual Cooperative Program dollars should be directed toward the national organization. Why? Because, according to Chapman, Baptists should take “a holistic view of the convention’s ministries.”

Chapman also expressed concern about the trend toward churches’ support of independent mission projects while diminishing their contributions to the national organization through the Cooperative Program. This goes down the path toward “disorganization,” emphasized Chapman.

“We are all yoked together,” he said. “If the convention wishes to jettison central planning and strategically engineered ministry, it will…have to make that call. But doing either would be suicide. . . . “

So . . . when money is at stake, Morris Chapman is all for “central planning” and “full cooperation,” and he says not a word about local church autonomy.

“The world may never understand our polity.” That’s what Morris Chapman said when he rejected the possibility of Baptists cooperating together for the creation of a denominational database to track admitted and credibly-accused clergy predators.

The world can understand Baptist polity. That’s not the problem. What the world can’t understand is the inconsistency in how Baptists apply that polity in practice and in how they manipulate that polity to avoid clergy accountability.

These guys talk out of both sides of their mouths constantly. They are so passionate about their organization and protecting it at all cost.
They speak of reaching the lost but are blind and cold to the wounded who seek help. They claim to follow Jesus but their hearts are void of love and compassion.
They fight about their
interpretation of scriptures but miss the core of what Jesus taught and what scripture teaches...love.
No scripture in the Bible supports preserving the SBC and their organizations. Without love they are nothing.
More and more the SBC power boys show their dark and empty hearts. They follow their lust for power and greed not Christ. They are no better or different from the politicians who say they stand for family values yet lead double lives.
They are deceivers.They will never do anything that helps others unless it also profits them in some way and doesn't jeopardize their positions of power and wealth.

I think we all need to stop appealing to anyone in the SBC. It's a total waste. It is the people in the pews who need to become educated and have their hearts stirred.When letters and appeals are made to the SBC to stop clergy sexual abuse...do they read them to the church members? They don't. As long as the pleas for change and accountability go to the SBC leadership nothing will ever change.

That's a line that ought to cue a country-western song. I'm gonna have to work on it . . . maybe something sort of like this . . .

"Deceivers, dissemblers and polity-pretenders. ..
Fakers and frauds of faith."

In my head, I'm hearing Willie Nelson's voice with a tune sort of like the "deceivers, believers and old in-betweeners" part in "Hands on the Wheel."

"CP giving from churches as a percentage of un-designated gifts received declined from approximately 10 percent just over a decade ago to about 6 percent in 2008."

And now even the churches are not tithing.

For now, I personally think it's a good thing that Cooperative Program giving is declining. Without accountability, power corrupts, and so people should stop giving their money to places where accountability is lacking.

Hard-working people who try to give money in the service of God's purposes deserve to know that the money they give is indeed going for good purposes and being well-managed. But in Baptistland, it's almost impossible to even get information about the salaries and compensation packages paid to Southern Baptist Convention executives, officials and employees. Rather than honoring people's trust with transparency, Southern Baptist leaders exploit that trust with secrecy.

Read more about the secrecy of Southern Baptist salaries in my prior post, Almighty Dollar.

It is just so annoying when I come and visit the site and notice how many preachers by comparison in Protestant affiliations is just as bad as number as Catholic priest were a few years ago. I read the latest about the one in Virginia today on your site. Steve Camp the Christian singer is right.."the wolves are among us and yet we sound no alarm.' To quote Keith Green, too many "are asleep in the light."

G. Casey is talking about the news of well-known Virginia Southern Baptist youth pastor Jack Duffer who recently pled guilty to multiple counts of aggravated sexual battery on charges involving two girls, a 13-year-old and a 17-year-old. As reported at the time of his arrest, he moved to Virginia in 2007 after resigning the pastorate of a large Hawaiian church, citing his "passion for the youth."

Seems a bit strange, doesn't it? A guy who was born and raised in Hawaii and who held the pastorate of one of the largest Southern Baptist churches on the island resigned and left the state to accept a youth minister position in Virginia.

As G. Casey says, in Baptistland, "wolves are among us and yet we sound no alarm."