For Christ's sake, do something! 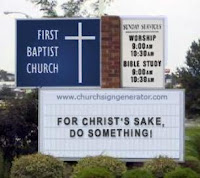 Southern Baptist president Frank Page issued a call for more civil discourse. He’s “sick and tired” of all the blogs and websites about church conflict and denominational disagreements. “For Christ’s sake, stop!” he says.

Page voices concern about lost souls and says that the “witness” of Southern Baptists “is being diluted” by all the public conflict. “When newspaper reporters are called and church conflict becomes known in the newspaper…what do you think this does when lost people read it?”

I wonder if Page realizes that this is almost exactly what countless church leaders have used to silence victims when they try to tell about clergy sex abuse?

I’ve heard too many versions of this twisted justification for Southern Baptists’ do-nothing attitude toward clergy sex abuse.

Of course, I think Page’s comments were actually directed more toward Baptist bloggers, such as SBCOutpost, and not specifically toward StopBaptistPredators. Still…I’ve heard from so many abuse survivors who have been fed some version of this “don’t hurt the church” line that I couldn’t help but see the parallel.

And frankly, compared to the brutality of abuse and blind-eyedness that so many Baptist leaders have inflicted on the people I hear from, most of the internecine conflicts on the Baptist blogs just seem inconsequential. They fight over styles of worship and private prayer language, and meanwhile, clergy child molesters stay in their pulpits. To me, it looks like they’re fighting over how many angels fit on the head of a pin, while real live kids remain at risk from clergy-perpetrators whom others have attempted to report...but there was no one who would hear them.

It is only a false veneer of civility that would leave so many clergy child molesters in their pulpits.

It’s ironic that Page would publicly complain about those who call newspaper reporters on the very day that the Chicago Sun-Times printed an editorial about a Southern Baptist church that knowingly kept a convicted child molester in the pulpit for 3 years. (More on the Chicago story here and here .)

That’s a sad statement, but it’s reality. It wasn't church or denominational leaders that got the predator out of the pulpit.

If Dr. Page were truly concerned about souls, he would find a way to rid this denomination’s ranks of clergy predators and to address the soul-murdering impact of their horrific conduct.

For Christ’s sake, and for the sake of kids, do something!

Posted by Christa Brown at 1:56 PM

I never knew why they kept him in a position of leadership. Sad really, what is happening to Gods people?